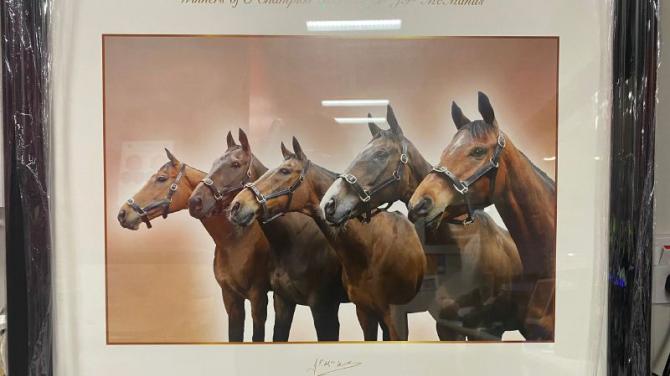 A NEWTOWNSTEWART woman is hoping is raising money for Macmillan Cancer Support in loving memory of her late parents.

Ashlene Canning is organising a draw, which has garnered support from the horse racing community near and far, in memory of her parents, Joan and Gerry Kennedy, who tragically passed away within the first few months of 2022.

Joan tragically passed away in January from pancreatic cancer, a few months after her diagnosis. Gerry also passed away from COPD in 2022.

However, Ashlene says the support that her mother received from the Macmillan Cancer Support Team was "truly incredible", and as a way of saying thanks, she has used her many connections in the horse racing world to organise a fundraising draw that is to take place this week.

And Ashlene's 23 years working in the local Ladbrokes offices in Omagh and Strabane has certainly paid off - some of the big names in the racing world that are supporting the raffle include JP McManus, who has donated a framed fine art print of his five Cheltenham Champion Hurdle winners, while Fankie Dettori has donated a singed whip; Other prizes include four flexi tickets for Punchestown Festival, Badges to the Irish Derby with a tour of The National Stud, Galway Racing merchandise, Minella Racing goodies, Coolmore jacket, an AP O’Brien jacket and cap, and a Magnolia Bloodstock jacket.

She continued: "The support I have received for the draw has been nothing short of extraordinary, and I never expected such an array of prizes and for so many tickets to have been sold.

"I am keen to raise money for Macmillan, as the support team were so good to Mummy. When she was diagnosed her decline was rapid, but Macmillan were by her side, comforting her in every way they could. They were truly remarkable and invaluable.

"The service is dependent on donations, and the number of people that are dependent on charities like Macmillan is staggering. They need all the support they can get so I wanted to do something that would help raise some money, just as a way of saying a huge thank you."

And there is no doubt that Ashlene's fundraiser has gotten off to a flying start, and with it now on the home straight in advance of the draw on Friday.

"I have worked in the Ladbrokes offices in Strabane and Omagh for years and through my career I have made many good friends and some connections in the racing world.

"I have also built up good relations with many stable lads and lasses from going to races over the years. For this draw, I have called upon the help of most every one of these connections, and I have been astounded by the generosity received.

"I hope that the generosity continues to flood in for such a worthy cause," Ashlene said.

Tickets for 'The Big Racing Raffle' are priced at £5 each and are available from the Ladbrokes shops in Omagh and Strabane. Tickets can also be purchased on paypal at christinemaguire1989@gmail.com.