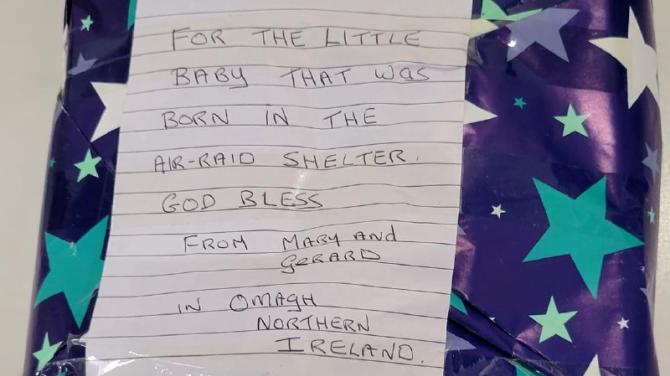 A PACKAGE from an Omagh couple addressed to a Ukrainian baby born in a bomb shelter has “warmed the hearts” of humanitarian volunteers.

John Vellinga, a Canadian man who is helping with humanitarian logistics in Poland, has described how fellow volunteers came across the package that had been sent from Mary and Gerard from Omagh, which was addressed to "the little baby born in the air-raid shelter."

The package, which was sent from the couple, read: "for the little baby that was born in an air-raid shelter. God bless. From Mary and Gerard, Omagh, Northern Ireland."

According to John, the package has "touched the hearts" of volunteers amid the crisis, and he is currently trying to ensure that the heartfelt gift gets safely delivered to the new mother and her newborn - who he thinks is 32-year-old Viktoria, who gave birth to Fedor in a bomb shelter in Kyiv at the beginning of March.

He is also trying to get in touch with the Omagh couple to express his gratitude.

John said: "A few days ago I was at the HelpUkraine centre as three trucks from Ireland were being unloaded. Everything is sorted by volunteers and they found this - a package from a couple in Northern Ireland.

"Everyone was so touched that it was left out for most of the day to warm the hearts of the volunteers. They also sent drawings from children in Ireland to Ukrainian children. There was not a dry eye in the place.

"It was left on the table for a few hours so that all of the volunteers could see it and let it touch their hearts.

"The present is still in the office at the HelpCenter in hopes someone will find the baby. If we find out where they went, we can get this present to them."

John added: "Such love cannot be overlooked. It would be cool if 'Mary and Gerard' from Omagh in Northern Ireland saw this. What sweet people. Their hearts were touched. And their touch came all the way here."

John has also encouraged more donations to help centres in Poland, given a decline in donations received in recent months. For more information visit www.helpukraine.center.