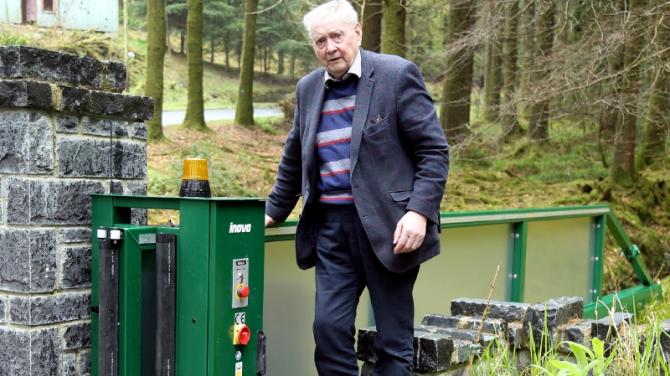 A LOCAL councillor has welcomed the council's decision to begin closing the automated gates of Gortin Glen Forest Park daily, which comes shortly after incidents of anti-social driving experienced at the location.

Fermanagh and Omagh District Council recently made the announcement that they would now be closing the gates to the popular tourist destination daily from 9.30pm to 6.30am.

The move comes shortly after hundreds of cars descended on the park under the cover of darkness to perform 'donuts' and other unsafe manoeuvres, while causing vandalism and leaving vast amounts of litter behind.

However, council has asserted that the decision was not on the back of the recent incident, but rather as part of their ambitions to improve visitor experiences at the park.

A spokesperson said: "The automated barrier at the entrance to Gortin Glen Forest Park was installed as part of the recent improvement works undertaken by council.

"The implementation of automated closing/opening times at the entrance to the Forest Park is part of the council’s ambition to provide an enjoyable, safe and sustainable experience for all visitors to the Gortin Glens; this was not a response to any single incident/event."

Ulster Unionist councillor, Bert Wilson, has welcomed the council's decision, having recently spoken out about the damage caused by the anti-social drivers at Gortin Glen.

He said: "It is clear that this was the proper thing to do, and upon surveying the damage caused by a recent incident involving cars, and the nature of it given that it was under the cover of darkness, the most logical thing was to start closing the gates. I welcome the council's swift action on this.

"Large amounts of people including young families enjoy the forest park every week, which is thanks to hefty council investment in facilities. It is unbelievable and unacceptable that we have other people who were determined to wreak havoc under the cover of darkness.

"Something had to be done, and the daily closing of entrance gates is a simple and effective measure that will help to deter this activity.

"I would also suggest that CCTV cameras are installed at the park at night to help catch and deter anyone who persists with this kind of activity in Gortin Glen Forest Park."

The PSNI said they are aware of recent dangerous driving incidents, including cars performing ‘donuts’ and other unsafe manoeuvres, in the Forest Park area of Gortin Glens.

Sergeant Hamill said: “This type of activity can have a negative impact on the local community. While those involved in it may look upon it as ‘fun’, this is reckless behaviour and those who have to endure it are very anxious and upset by it.

“If you are driving on the roads or in a public place, you need to take it seriously. Be aware of the responsibility to yourself and those traveling with you, other drivers and their passengers as well as their families/friends - and the community as a whole. This is an area used by dog walkers, cyclists and families with young children.

“Police will be conducting additional patrols in the area, with a view to detecting the offenders and deterring this anti-social and dangerous driving.

“It is important to point out that drivers should expect to receive a fine or prosecution through the courts, should they be detected engaging in careless or dangerous driving or modifying their vehicle illegally.

“We would urge anyone who knows anything about dangerous driving in their area to note down the registration details of the offending vehicles and contact police immediately.

“This is a serious matter. This type of dangerous driving may result in serious injury or worse. For example, car tyres become worn more quickly affecting its ability to stop in an emergency.

“There is a chance that a driver, passengers or innocent members of the public could be seriously injured, or even killed.

“We see too many deaths on the roads in Northern Ireland. We would like the community to report these incidents to us. Note down any details and phone police on the non-emergency number 101.”