Family seek justice 50 years on from killing of Castlederg man 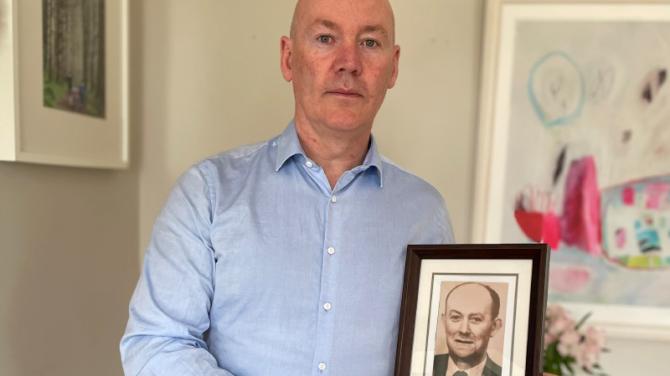 THIS Friday (April 29) marks the 50th anniversary of the killing of Edward Gormley of Scraghey, Castlederg at Liskey Road, Douglas Bridge.

Edward was aged 57 at the time and married to Teresa with six young children, Geraldine, Carmel, Eamonn, Veronica, Jacqueline and Don.

The family man was going about his business as an insurance agent when shot dead in a remote location known as Sproule’s Farm between Victoria Bridge and Newtownstewart.

Around 5pm on Saturday, April 29, 1972, a local woman passing by came upon Edward Gormley’s grey two door Ford Escort MK 1 sitting stationary at an angle at the Liskey Road junction.

Mr Gormley was slumped at the steering wheel, and another male was leaning into the passenger side, before running towards farm buildings.

They arrested a man hiding behind a tree, identified as Joseph Alphonsus Kerr.

Kerr was interview by RUC. At interview he stated it was his first job for the IRA, and that he did not intend to kill Mr Gormley, only intending to rob him.

Kerr had previously served six years in the army with the Royal Inniskilling Fusiliers.

In evidence at his trial Kerr stated that he spent the day with Frank Hannigan of Ballycolman, Strabane, in a plot to rob the insurance man.

Hannigan brought the revolver with them to the location where Hannigan told Kerr to exit the vehicle as he would wait around the corner.

Kerr stated that as Edward Gormley’s car came towards him, the gun went off.

A jury found Kerr guilty of manslaughter and he was sentenced to eight years imprisonment.

Despite a coroner’s inquest and a trial in 1973, RUC and HET investigations, the Gormley family feel that there are too many unanswered questions and unresolved issues surrounding their father’s death.

They intend to ask questions of the PSNI, An Garda Siochana and MOD with a view to release of investigation documents.

The Gormley family consider that the RUC investigation at the time was closed off too rapidly.

Only one person, with a military background, was brought before the courts whilst another clear suspect was never arrested nor tried.

They feel that RUC/PSNI, MOD and An Garda Siochana all have information or documents that will assist the family in their quest for information.

For 50 years the Gormley family have maintained their dignity, respecting the memory of their later father Edward and mother Teresa who passed away in 1986.

All they seek now is answers. Any person with information of whatever nature is welcome to contact Don Gormley (don@fee-g.com) or Patrick Fahy Solicitors, Omagh.