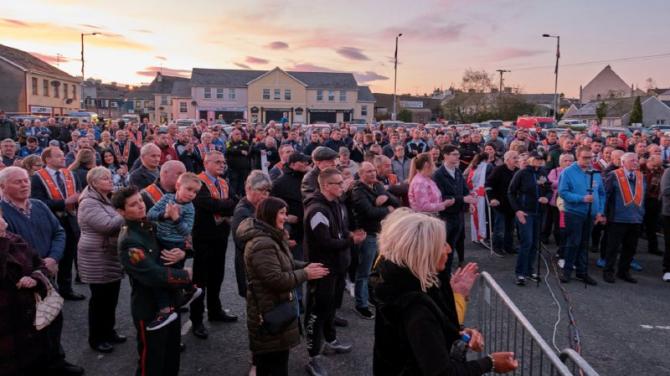 AN impassioned plea for unionists to "stand together" to oppose the Northern Ireland protocol was made by DUP leader, Sir Jeffrey Donaldson, at a rally in Castlederg.

The event, held on Thursday night of last week, was the latest in a series of rallies held throughout Northern Ireland, which saw hundreds of attendees, including bandsmen and members of the loyal orders, turning out in Castlederg to voice their disapproval with the post-Brexit protocol arrangement.

A number of notable speakers took to the stage to denounce the protocol, which was said to be "designed to foist Northern Ireland from its rightful place in the Union." These included Sir Donaldson, DUP leader, Jim Allister, TUV leader, Jamie Bryson, prominent loyalist commentator, and Castlederg man, Trevor Clarke, West Tyrone TUV assembly candidate

In recent months, the Northern Ireland Protocol has been the subject of growing controversy and Unionist outcry, following the imposition of customs checks of goods coming from the United Kingdom into Northern Ireland. However, the same checks aren't required for goods coming from the Republic of Ireland, leading to fears amongst the unionist community that "an all-Ireland economy" is being allowed to flourish.

Addressing crowds, Sir Jeffrey Donaldson said it was "critical" that unionists banded together to oppose the protocol.

"The most important thing that we must do as unionists opposing this protocol is to stand together," he said. "That is the message that our opponents must hear loud and clear.

According to Sir Donaldson, the protocol has been used as a means by which the EU is "punishing" the UK for leaving in 2016, by making trading to Northern Ireland increasingly difficult.

"The UK parliament must introduce legislation to repair damage that has been done to Act of Union. Nothing less will do. We need a law that clearly protects our right to trade within our own country."

Sir Donaldson said that the protocol has left people in Northern Ireland feeling like "second class citizens in their own country", and used recent changes to VAT in the UK, that cannot apply in NI due to the protocol, as an example of this.

"The UK recently granted concessions on VAT, which is a form of taxation," he said. "But this could not apply it to NI because of protocol. This is reality in NI today, as many of our rules and regulations on how we trade are being made by the EU, and none of us have any say in this.

"We were told by the government in London that Brexit meant taking back control, but not for Northern Ireland it seems."

The DUP leader said it was important that unionists from all backgrounds turned out to vote on May 5, as a means of opposing the protocol.

He said: "I'm not here tonight to tell you who to vote for, but am here to say this, it is important that as unionists we vote wisely and transfer our votes down the unionist ticket to return more MLAs who oppose the protocol to Stormont."

Speaking at the rally, TUV leader, Jim Allister voiced his fears that the protocol could is seeing "the very dismantling of the union before our eyes".

He said: "At present (because of the protocol) over half the laws that govern our economy are not made in Belfast or London, but in a foreign jurisdiction, over which we have no say.

"That is the very dismantling of the Union before our very eyes. Surely this is something that no one worthy of the name unionist can live under or accept. The message is clear - the protocol will go, must go, because this union will be, must be, maintained."

Mr Allister said that the protocol is making trade with the United Kingdom "difficult", and that it is in the process promoting an "All-Ireland economy".

"All of this is with the political intent that once you create an all-Ireland economy, it is a short step to a political all Ireland," he said. "That is why all unionists must unite and oppose the iniquitous protocol.

Mr Allister added: "We are only in the shallows of the protocol, and we have seen nothing yet because of the grace periods. That is why it is vital and critical that this protocol is not permitted to bed in any further.

"The message on May 5 has to be that unionists will not put up with being subjugated and edged out of this Union. Let that be the message that rallies across this constituency."

"Make no mistake, the protocol is designed to put us under the jack boot of the EU and the Irish government," Mr Bryson said. "Let us be absolutely clear about what it does. We, as a Union, as a country, are being held hostage in an economic united Ireland, and let no-one tell you any different.

"The Union subjugating protocol must go, full stop, no equivocation, no compromise. Let our message echo from Castlederg tonight and fly across streets and fields of Ulster, we are a union of unionists, and let us say enough is enough!"

The candidate said: "The protocol is causing profound damage to the economy. 200 British companies have recently stopped trading with Northern Ireland. Why? Because of the protocol related bureaucracy in trading with two constituent parts of same country.

"An individual I know in haulage tells me that crates used to transport poultry from Northern Ireland to the mainland are now subject of customs declarations before they can be returned to Northern Ireland - empty. This is bureaucracy that is unnecessary.

"And another local individual, if he take his champion cattle to market in Carlisle, and they don't sell, he can no longer bring them straight home to Newtownstewart. Instead, they have to stay in GB for six months. Think about additional costs involved.

"The protocol is a disaster for trade and is exacerbating the cost of living crisis. Less competition means less choice, and shortages in supply causes production delays and cost increases. This will ultimately end up hurting the public and consumer.

"The protocol is making this situation worse, and it cannot be allowed to continue."