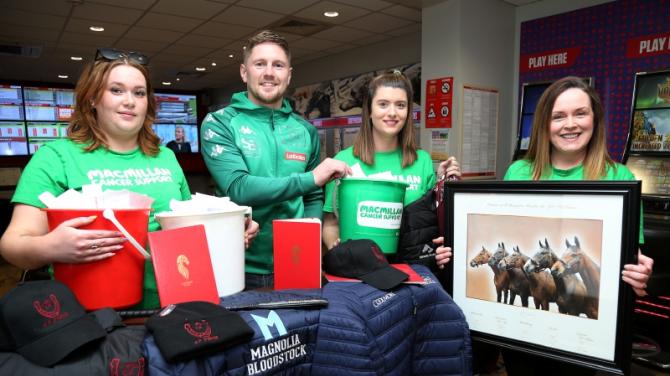 A HORSE racing-themed raffle has raised £2,800 for Macmillan Cancer Support - with even Irish professional boxer Jason Quiqley lending his support!

The draw was organised by Ashlene Canning in memory of her parents, Joan and Gerry Kennedy, who tragically passed away within the first few months of 2022.

Joan tragically passed away in January from pancreatic cancer, a few months after her diagnosis. Gerry also passed away from COPD in 2022.

The raffle was held on Friday at Ladbrokes, Omagh, where those in attendance were greeted by Jason Quigley, Irish professional boxer, who came along to show his support.

And Mr Quigley wasn't the only big name associated with the raffle. Well-known figures in the horse-racing community also lent their support, with JP McManus donating a Fine Art Print of his five Cheltenham champion hurdle winners, and Aiden O'Brien donating a variety of prizes and merchandise.

Ashlene said she is "blown away" by the support the raffle received, with the fundraising total currently sitting at £2,800.

"I am completely blown away by the support we got in such a short space of time," she said. "It was fantastic to have the boxer, Jason Quigley, in attendance. It was a pleasure to meet him and it was great craic to have him there. It made event all the more memorable.

"The racing world really came together for it when it came to donating prizes and publicising it.

"Dave Yeats, of the Daily Mirror, took a video of Frankie Dettori announcing the donation of a signed whip. We were all able to share this on social media and this really helped promote the raffle and drum up more interest."

Ashlene continued: "Of course, the people that won prizes are absolutely delighted, and following the success of the event we are hoping to undertake further fundraising throughout the year in aid of Macmillan.

"It was lovely that we were able to raise money for Macmillan, as this is a charity that means an awful lot to us.

"The support team were so good to Mummy. When she was diagnosed her decline was rapid, but Macmillan were by her side, comforting her in every way they could. They were truly remarkable and invaluable."

Sccording to Ashlene, future fundraising efforts for Macmillan are now on the cards, with a limited edition print signed by none other than Aiden O'Brien set to be raffled in coming months.

Other prizes were tickets to Punchestown races, donated by Ladbrokes, badges to Irish Derby at Curragh with a tour of the National Stud, donated by Brian Kavanagh, a Minella Racing Bundle, donated by Hotel Minella, a Magnoila Bloodstock jacket from Tom Kerby, an A P O'Brien bundle from Aiden O'Brien, a St Marks Basilica jacket donated by Coolmore Stud, Galway races merchandise donated by SMRC and Sean Gormley, a goodies hamper donated by Tracy McLaughlin of ladbrokes Strabane, a bottle of Henessy from John Gallagher of the Two Castles Boxing Club, a Frankie Dettori singed whip sponsored by Dave Yates of the Daily Mirror, and AP O'Brien racing hats, sponsored by Aiden O'Brien.