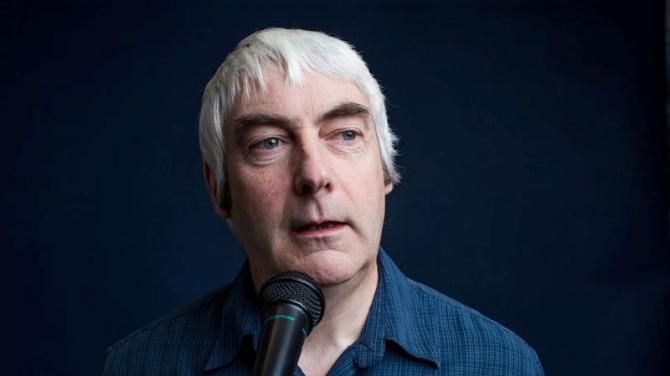 DERRY Girls star and comedy legend, Kevin McAleer, or better known as 'Uncle Colm', will be performing a stand up show in The Strule Arts Centre on Saturday, May 21.

McAleer, has been on the comedy scene for over 30 years now and his latest stint on hit show ‘Derry Girls’ has given him more stardom and new fans. His career began in his mid-20s with an open mic spot at a Dublin club, before moving to London.

As well as being a comedian and actor, he is a proud family man, husband of Valerie Whitworth, well-known in the singing world, and father to Florence, Louis and Josiah.

The man, who grew up near Omagh, got involved in comedy at a very early age.

McAleer recalled: “ At school, I was a bit of a clown with softer teachers and with the strict teachers I was a good boy!”

McAleer admits he has been talking ‘nonsense’ - as he puts it - for 30 years and shows little sign of stopping – but it's amazingly funny at the same time. One of the founding fathers of modern stand-up, he has influenced a whole generation of comedians in Ireland and the UK, and his live shows remain a master class in comic timing and delivery.

And so now he is bringing his stand up to his native Omagh.

Asking Kevin about his Tyrone roots and his upbringing he commented: "Since the whole world and his Irish mother is talking about identity, I was born and raised a Catholic in rural Tyrone, and having circled the globe a few times, I’ve ended up back where I started in the home place.

"The house goes back at least a few generations on my father’s side, and my mother was McDermott from a few miles up the road."

McAleer’s carefully polished scripts have drawn comparisons with writers of the calibre of Flann O’Brien and Beckett. With not a word out of place, the result is an evening of concentrated laughter that can leave audiences with hilarious side-effects – such as sore sides and aching jaw muscles.

The Tyrone man shot to fame back in the mists of the 1990s with his regular appearances on RTE’s Nighthawks, leading to sold-out nationwide tours and the best-selling EMI video ‘Turn it On’ in glorious VHS.

His live shows remain where it’s at and his timeless brand of humour continues to span the generation gap with ease. Whether he is headlining another student rag ball, or raising the roof off the Royal Albert Hall, McAleer remains a master of stand-up comedy at the very height of his craft.

Speaking about the night Kevin commented: "I'm looking forward to performing back in Omagh and, of course The Strule Arts Centre. It'll be a great night with local support, what more could you ask for?".

Tickets for the night itself are going quickly, so grab yours soon as this night promises one not to miss! You can get them online or pop into the arts centre and purchase them there!