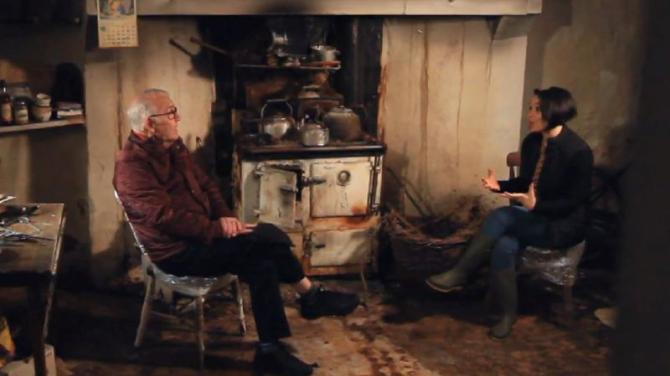 The series uncovers some of the less well known spaces and places in Northern Ireland.

Sara has been travelling across Northern Ireland - and sometimes a little bit further - celebrating Northern Ireland's hidden gems and finding out about places we never knew existed as well as exploring places we don’t normally get to see.

The latest episode, which aired last night (Tuesday), involved Sara meeting John McCarney who is custodian of his family’s cottage in Trillick which has stood untouched for years.

He shared the cottage’s history with Sara and the fascinating stories of his predecessors who lived there.

In this episode too, viewers see Sara’s fitness tested to its limits in a training session with the Northern Ireland ladies’ football team and she also heads down a massive plughole at the Silent Valley reservoir. .

Sara said: "This series was the perfect opportunity for my more adventurous side to come to the fore! Hard hats and hi-vis gear was my uniform on several of the days’ filming!

"It was just brilliant getting out and about meeting different people and visiting all these places you hear about and some you don’t.

"Thanks to all the contributors who allowed us access to these hidden gems - we had great fun filming and we hope everyone enjoys watching.”

UTV programme producer, Alison Fleming added: “UTV has a long history of highlighting the extraordinary in the ordinary through its news and programmes and we hope the viewers come away from watching this new series feeling not only entertained by Sara’s adventures, but also educated, knowing that little but more about our rich surroundings here.”

The series is a UTV Production and is sponsored by Future Space.

You can watch this episode on catch up on: www.itv.com/utvprogrammes