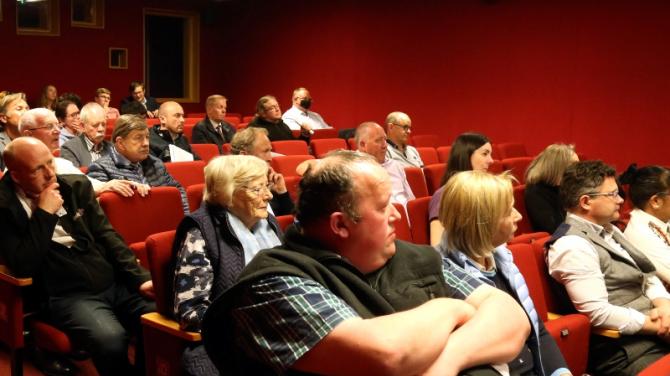 A DISTINCT tone of dissatisfaction was palpable amongst Campsie traders at a recent meeting about proposed streetscape improvements.

The proposals recently put forward by the council have caused controversy among the Campsie business community, who fear that the loss of all-important on-street parking in the area could adversely impact trade.

Last week, a public meeting was convened in the Strule Arts Centre, where the business people of Campsie aired their concerns to councillors, council officials and representatives from Taggarts, the Belfast-based consultancy firm tasked with designing the project.

From the outset, traders reiterated their fears that doing away with on-street parking would see a sharp drop in the number of people using street, as they rely on quick 'in and out' trade to survive. Without proper parking, they argued, customers would simply go elsewhere.

And business owners also slammed what they regard as a "complete lack of communication" from the council about the scheme, and the fact that they weren't notified about a public consultation that took place over Christmas.

However, 69 per cent said that easing of traffic congestion 'more important' than on-street parking provision.

Outlining the four proposals that were produced, Mr McGovern said that three of the proposals would see "considerable" parking spaces lost. However, the fourth plan would only see the loss of three parking spaces and would he claimed, allow more safe places to cross and aid overall accessibility in Campsie.

In response to the findings of the consultation, Rosemary McCartan, of Pizzarama stressed that "100 per cent" of her customers are opposed the removal of parking in Campsie.

She said: "Many businesses in Campsie have conducted their surveys and from my experience I can say that 100 per cent of customers would be absolutely horrified to think that these changes would make it more difficult to access businesses in Campsie. Our business group has a massive amount of public support."

Mrs McCartan also said that the loss of even three parking spaces would be significant, given the existing congestion issues in Campsie.

"We have looked at all the proposals what we can say that none of them are suitable. Yes, there are definitely issues that need addressing, but taking away any parking spaces is going to have a massive impact on the businesses and sustainability in Campsie.

"You cannot sell these plans to us the way they are now. And we will fight them to the end."

Helena Muldoon, of Helena's Hair Clinic, Campsie, voiced her dissatisfaction with an lack of communication regarding the proposals for Campsie.

She said: "Why weren't we notified? We are the people who have lived and worked here for 30 or 40 years. We should have been notified. We pay the rates, we are the ones who live there and work here, so we should have been the first point of contact. It dosen't make sense."

In response, Kim McLaughlin, director of Regeneration and Planning at Fermanagh and Omagh District Council, acknowledged that the business community should have been better informed, but stressed that "the conversation had just begun."

Meanwhile, a local resident of Campsie said that the best course of action in any proposal would be to "sort out" the present parking and congestion issues.

"The traffic in Campsie is disastrous, and this has been an issue there for years. From a retailers point of view, you want people in and out, and at the moment, Campsie is a deterrent. People are avoiding it as they cant get up and down.

"The best thing to be done is to sort out traffic so that someone who wants to nip in can do so, as at the moment you can't risk it."

Sarah Fyffe, whose family have close ties to Campsie, said it was important that the vibrancy of the street, with it's many independent traders and businesses, was maintained.

"My family, until recently, have been residents in Campsie for over 80 years," she said. "As far as I can see, a lot of towns are becoming very generic. This is why Campsie needs nurtured, as it is these independent businesses that make it a very interesting place, instead of just having pound shops etc. It is good that this is being talked about, but Campsie must be nurtured and this must be looked at very carefully."

UUP councillor Matthew Bell stressed that this was a "very early process", and it was important that the local business community was engaged in plans going forward.

"There is money up for grabs, and engagement with everyone needs to happen to ensure the money spent properly," the councillor said. "As you all know, businesses are life and soul of Campsie. But this isn't just about parking, it's about lighting, it's about making it a bit prettier and encouraging business, and about making life better for residents who live there.

Councillor Bell also advised the Campsie Business Group to identify a number of people who could represent the group on future meetings of the 'steering committee'. At the meeting it was agreed that two members would be elected to represent them in future consultations.