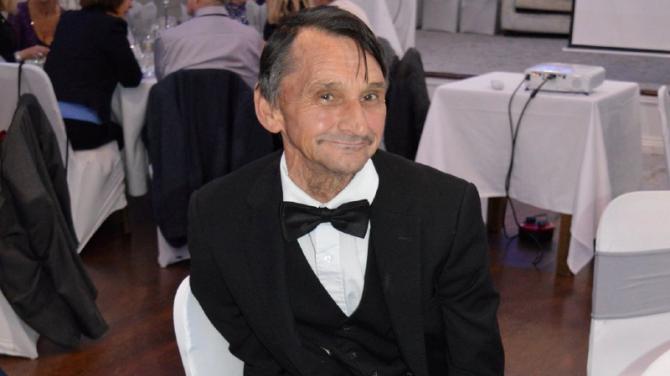 TRIBUTES have been paid following the sad passing of an Omagh man who starred in four major productions by a local musical theatre group for people with learning disabilities.

Gerard (Gerry) Maguire, of Mullagmore Cottages, was laid to rest on Friday following his unexpected passing last week. He was beloved son of the late Eileen, and was predeceased by brothers Martin and Kevin.

He was a well-known in the local area and was one the longest-serving members of the local theatre group, Skyzdalimit, having joined in 2014.

Both his genuine, positive nature and distinct style, often stylishly turned out in a three piece suit and shining shoes, has left an endearing mark on all those who knew him.

And, poignantly, Gerry was due to to star once again as 'Gypsey Gerry' in the group's upcoming June production, before his unexpected passing last week.

"Gerry will be very very badly missed by all of us in Skyzdalimit. We are deeply saddened and it’s a terrible loss for us all; we are like a family in Skyzdalimit.

"We express our sincere condolences to his family, friends and carers who looked after him so caringly and devotedly."

According to Sheena, Gerry was set to star in his fifth Skyzdalimit production Gypsy Gerry, a travelling troubadour, at the Strule Arts Centre in June. He had attended rehearsals as recently as two weeks ago, where he was in his "usual brilliant form."

Sheena continued: "We were shocked to learn of his passing as he had just attended a rehearsal two weeks ago and was in his usual brilliant form.

"Everyone loved Gerry and he brought joy and happiness to every rehearsal. He was a true character and a beautiful genuine person with a sparkle in his eyes at all times. No cast member came to rehearsal so stylishly turned out, in his three-piece suit and shining shoes.

"The whole cast looked forward every Monday at rehearsals to Gerry’s fantastical stories that were real to him - be it, scoring incredible goals for Tyrone against Kerry, going on a three-week tour of the USA with his band (The Brian Coll Band!), appearing on innumerable TV programmes, the birth of his latest nieces and nephews, the wedding of his daughter, and endless more.

"It’s so sad as our last performance before Covid was also dedicated to the memory of another cast member, Donnie Robertson, who had just recently passed.

"And so too, this year’s performance will be dedicated to the memory of our dear friend, Gerry, who will never be forgotten and remain forever in our hearts. RIP Gerry Maguire."

The Strule Arts Centre also paid tribute to Mr Maguire, describing him as a "bright light that lit up the room."

"The Stage has gone a little bit quiet at the Strule Arts Centre as we learn of the sudden passing of Gerry Maguire.

"Gerry was well known at Arts Centre - he appeared on our stage in many performance with Skyzdalimit and also busted some moves on the dance floor when he came to the Black Moon Disco.

"He was a bright light that lit up a room when he entered. He loved music, he loved to dance and he loved to chat and we loved the fact that he always dressed so well when he came to see us - he was never without his Dickie Bow - and he had quite the collection! They dont make many like Gerry."

Skyzdalimit’s production, Circus, inspired by The Greatest Showman, will be at the Strule Arts Centre on Friday, June 24 and Saturday, June 25. Tickets are now on sale.