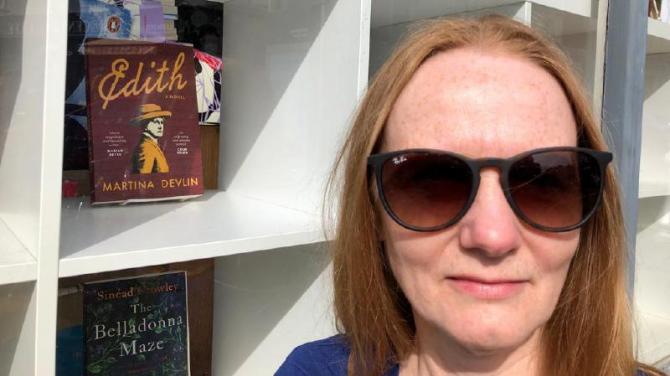 AN OMAGH born best-selling author and award-winning journalist is to appear at Omagh Library next Tuesday (May 24) to give a talk on her latest publication, 'Edith'.

Martina Devlin, originally hailing from Omagh but now residing in Dublin has had 11 books published.

Explaining what got Martina into writing, she said: "There were always a lot of newspapers and books in our house because my father Frank Devlin, a bus driver, was a reader.

"He influenced me because he was a natural-born storyteller – especially ghost stories. I was also influenced by Benedict Kiely because he came from Omagh.

"If you can’t see, you can’t be – through him, I understood it was possible to become a writer. My favourite Kiely is the novella ‘Proxopera’ which prefigures the Omagh bomb by two decades."

‘Edith’ is book number 11 for Martina, eight novels, one short story collection and two non-fiction books. And she has been lucky enough to have been published for more than 20 years.

"I’ve also written two plays. I had wonderful help for this latest book from the librarians at Queen’s University Belfast, where a collection of Somerville and Ross papers is housed in its special collections. I’m a big fan of libraries," she continued.

Explaining what the new novel 'Edith' is about, Martina said: "The novel explores conflicting loyalties, and is about the Irish RM co-author Edith Somerville, of Somerville and Ross fame.

"It’s set during the Troubles of 1921-22. Edith lives in one of the big houses, Drishane in Castletownshend, West Cork, but is unsure if she can continue there.

"The Somerville's are an Ascendancy family who have been in Ireland for centuries, but now there are night raids and neighbours are being burned out.

"Still grieving the death of her second cousin and long-term writing partner, Violet Martin (who wrote as Martin Ross), Edith tries to contact her through automatic writing and séances, and is convinced their collaboration can continue beyond the grave.

"George Bernard Shaw has a cameo role – he was a lot of fun to bring to life," she added.

Martina loves exploring overlooked women from history, giving them back their voices.

Edith Somerville fascinates her because she had hybrid identity, considering herself both Irish and British.

Despite the Good Friday Agreement’s recognition of dual identity, there is still a narrow view of it.

"I try to make the case that it’s possible to have multiple affiliations. Any individual can belong simultaneously to a number of groups, for example, gender, class, age-range and cultural identity.

"She was brave, loyal, creative and dynamic. She earned her own living as a writer and artist at a time when it was rare for women to be self-financing.

"She was also a farmer, horse-coper, huntswoman (I struggle with that, but she was of her time), and helped to run a beautiful old house for her father and then her brother.

"She was an activist for the votes-for-women campaign, and in 1912 gave a speech about the franchise at a meeting in Cork where she said it should be advanced on three grounds: For the Good of the State – because it needs help from both sexes; For the Good of Women – to educate them, give them equal pay for equal work and raise their general status; For the Good of Men – to enlarge their mental horizons. She certainly knew how to make an argument!"

Commenting on her upcoming talk and book signing at Omagh Library, she expressed her delight returning to her hometown.

"I’m delighted to be back, I have five brothers living in the town and I love to see them, along with sisters-in-law, nieces, nephews and cousins.

"Omagh will always be my hometown – I feel an instant sense of belonging when I walk its streets."

The talk and signing of latest novel 'Edith' will take place at 7pm in Omagh Library on May 24.