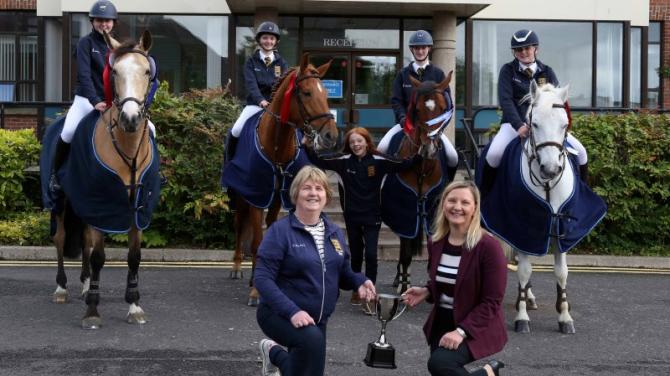 A TEAM of talented showjumpers from Omagh Academy picked up the coveted Bluegrass Horse Feed Trophy for their stellar performance at Balmoral Show, beating off stiff opposition from throughout Ireland to claim the victory for the first time in the school’s history.

The team of next generation showjumpers was made up of Amy McLaughlin, team captain, Kate Millar, Lori Smith and Zoe Keys, who each displayed their skill and horsemanship in the main arena to claim the prestigious inter-schools’ title.

The competition was tight, but in the end the top honours came west with the talented Academy quartet ending on zero faults.

Naturally, the Academy girls beamed with pride having well and truly excelled in the competition, which they had earlier successfully qualified for at the Causeway Coast Arena event in March.

Team chef d'equipe and school librarian, Gail Waterson, said the girls' success was the result of ‘hard work and dedication’ on their part over recent months supported by their parents and trainers.

"The entire school is very proud of the team’s achievement. The girls work hard not only in the actual event but in looking after and grooming their animals for such competitions. All the horses were beautifully plaited and well turned out for the occasion, and they were the only team on zero faults after eight rounds of jumping.

“Overall, this was a phenomenal achievement.

"Balmoral involves jumping on grass and it is a different surface to what the girls and their horses are more accustomed to. However, the school is very grateful to the Keys family who organised for the girls to experience jumping on grass at Necarne in Irvinestown which was much appreciated.”

Omagh Academy principal Mrs Ruth Maxwell was among the large crowd at the show and on hand to offer her congratulations to the winning team and thanked Mrs Waterson for her efforts in helping organise the team and its preparation for the showcase event.