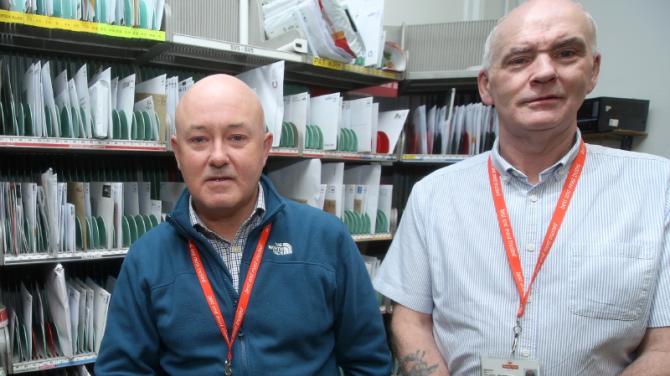 TWO managers of the local Royal Mail sorting office are embarking on well-earned retirement after some 72 years combined service - with the occasion made all the more special as they are cousins, and both started with the company in the exact same year!

Certainly, it was a turn of events that seemed written in the stars for Omagh cousins, Paul and Seamus Devlin.

Both starting out as humble postal workers for Royal Mail in 1986, the pair subsequently rose the ranks to become Delivery Operations Managers (DOM), and for well over a decade have been overseeing the sorting and delivery of mail to Omagh and surrounding villages and townlands. Overall, they have each completed 36 years with the company.

And on their final day of work on Friday, presents, cards and well wishes poured in at the sorting office on High Street, with the 80-strong team of bidding a fond farewell to both men who have well and truly 'put their stamp' on the organisation!

As Paul and Seamus explained, having both started and retired at the same time is "remarkable" - and even more so given the fact they are cousins who grew up together, sharing a mutual love for motorcycles long before their working lives even began!

"The whole thing has been a coincidence from start to finish!" Paul explained. "Seamus and I are cousins and good friends. We grew up together and rode motorbikes as teenagers in the early days around the town of Omagh, long before we started with Royal Mail.

"By sheer chance we both applied as postal workers in the same year - there was no rhyme or reason to this, it is just the way it worked out! And years later, by sheer coincidence again, we both ended up as managers in Omagh, and now we are both retiring at the time time as well - it's amazing and I'm sure it dosen't happen too often!"

While Seamus has spent his entire career in the Omagh Sorting Office, Paul has worked in a number of Royal Mail offices including Londonderry, before being moved back to Omagh as DOM. He has helped manage the Omagh office for 14 years, and alongside Seamus, has helped sustain and enhance the important local service.

However, Seamus said that assuming a managerial roles wasn't something he envisaged when he began as humble postal worker all those years ago.

Seamus said: "I joined the company in 1986, having previous worked in a bar and for a builder. Never in my wildest dreams did I think that I would end up as a manager in a big national company!

"A highlight of my time was getting the job as DOM. This was an immense personal achievement. Of course, being able to come in every day and work alongside staff you truly respect, with all the friendship and camaraderie that brings, is another brilliant highlight. I would recommend working for Royal Mail to anyone!"

Of course, any manager is only as good as their team - and Paul and Seamus said that they are fortunate to work with people who have consistently "went the extra mile."

Paul explained: "The success of a company is down to the staff, and we have been blessed with amazing people throughout. I always say that everyone is a cog in the big wheel, making sure it turns. Everybody matters, every single one, from managers, sorting workers and drivers. It takes everyone to make it work.

"Without this amazing team of people, we couldn't have made the Omagh office the success that it is. I can't tell you the amount of times people have went the extra mile to help cover shifts or cope with shortfalls when required.

"There have also been some amazing characters working over the years, including the likes of Liam O'Keefe who retired at the age of 75 last year. Overall, I don't look upon the people here as staff, I see them as friends and colleagues."

As with any job, the passing of the years has brought about major changes. Electronic devices have largely rendered on-paper record keeping obsolete, and new technology is continually being adopted to increase efficiency.

Seamus explained: "Years ago when there was no such thing as a computer, and everything was a paper trail with paper records. However,  more or less everything is electronic nowadays. Even the vans and postmen can be tracked. Technology is the future of Royal Mail, so there's no point trying to hide from it!

"Royal Mail never sits still in terms of the operation. We are always being asked to take on new initiatives and it was up to us to convince staff to adopt new technology and ways of working. It was challenging, but also very satisfying when new technology made things easier."

However, while technological advances have helped the smooth running of the operation, from time to time challenges emerge that only good old fashioned team work and 'getting stuck in' can solve. According to Paul, one of these challenges was the historic cold snap of 2009/2010.

Paul recounted: "What the team achieved during the winter of 2009/2010 was nothing short of remarkable. There was two feet of frozen on the ground and tough decisions had to be made to not allow postmen out due to health and safety concerns, even when they were determined to get the packages delivered.

"It was a challenge but health and safety comes first, and we worked through it and we are proud of how the situation was handled."

And, much more recently, postal workers were again put under pressure when the pandemic saw an immense upsurge in packages.

Seamus explained: "Because shops were closed and people were in the house ordering things online, there was nothing short of an avalanche of parcels coming in.

"This was one most challenging period we had, as before Covid we would have had three lorries of deliveries, but suddenly we had six or seven. The lorries were bunged and every parcel had to be processed and sorted each day. Staff absences due to isolating were also challenging.

"We had to put on an extra team on, and I am pleased to say everyone really went the extra mile and dealt with countless very early mornings to cope with the upsurge. Staff were amazing and really rose to the challenge. Thankfully, the pandemic has greatly calmed down now and normality has resumed - we got through it, as we always did."

With some 40,000 households on the books and a team of 80 staff, managing the sorting office in Omagh was no small undertaking. It is understandable, then, that the pair are looking forward to a well-earned retirement, which will allow them to pursue their mutual love of motorcycles, spend time with family, and maybe even plan a few holidays!

Paul and Seamus have extended thanks to all staff, past and present, for their help and support over the past 36 years.