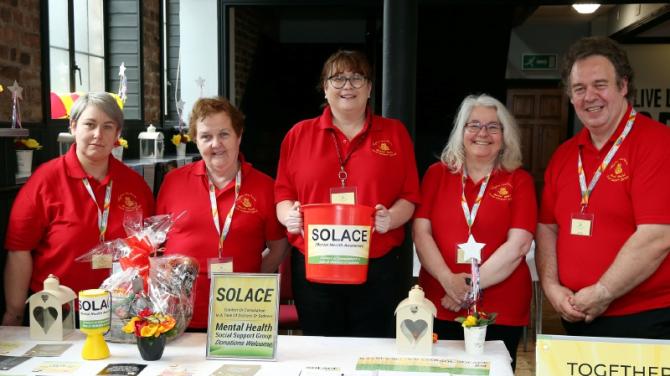 It was formed exactly a year ago when four people, each facing mental health struggles, began getting together in a local cafe, with the simple aim of supporting each through through strict lockdowns and social isolation.

What soon became clear was the distinct lack of mental health support in the Omagh area, and at a time when people were struggling most, they knew that more had to be done.

In effect, 'Together with Solace' was born, and one year on from the dreary pandemic days, the group has grown and developed in amazing ways. Starting out as a handful of people keeping in touch, the group now has almost 20 regular members, and holds a weekly drop-in service, has held several successful events, and boasts an active Facebook group with 1000+ members. The group has also recently been constituted through the council and has elected a committee.

The hard work of the group over the last 12 months culminated in a first-anniversary event at the weekend, which featured a sunrise walk and coffee morning, with big plans for the year ahead. Thanks has been been extended to all the businesses who have supported the group throughout the year and sent sponsorship, and to the fundraising group and committee members who helped making the First Anniversary Events a success.

Chairperson and original group member, Andy Campbell, said the group had humble beginnings but has grown with the support of both local community.

He said: "Together With Solace Mental Health Social Support Group was set up in May last year when four people got together to support each other over a coffee in a cafe in town.

"The idea of the group came about following the lack of help and support during lockdown and we said among ourselves that if we are not going to help ourselves then nobody else is going to.

"Over the past year we have grown week on week, although at the start it was hard as we had no premises to meet up in, and this left it difficult to get the word out about where we were going to be meeting up each week.

"We started of on a Friday morning meeting for a coffee and chat, organised through a Facebook group chat which we added friends who we thought could benefit from us."

According to Andy, thanks to the help and support of the local community, the group was able to take it's first tentative steps to become an important source of support for local people.

He continued: "After a few weeks we added on the Wednesday evening meet up into our weekly gatherings to accommodate those who work during the day. On the Wednesday evenings we would have met in St Julians Park or The Grange Park and bring flasks of hot water for tea and coffee for us all. We set up a private Facebook group page to keep people up to date and presently have over 1000 members.

"At the end of June, we got speaking to Pastor Tim from Omagh Community Church about what we were doing and he kindly gave us the use of the church building for our two weekly Drop In Coffee Morning/Evenings.

"It took a number of weeks to get the name of the group out there and about our Drop In Service but from around October we started to see our numbers grow.

"At present we have 15 to 20 attend both our weekly Drop In. We have had visitors travel from Belfast and Magherafelt to attend our group."

Andy said that some the key achievements of the group so far has been numerous successful events held, and getting a counselor on board to offer services to members.

"Some of our groups key achievements over the past year has been our Christmas craft fair, Christmas Coffee Morning, Christmas Lunch Outings, World Mental Health Day and World Suicide Prevention Day walks and coffee mornings, our numerous fundraising raffles, and Feeding the Homeless on the streets of Belfast.

"Also, having a counselor come on board with us to offer counselling to those within our group that need the help due to long waiting lists within the trust area. To date we have five people who have benefited from this service with a further number of people on the waiting list.

"We recently got constituted through our local council and formed a committee. A personal highlight for me has been our Homeless Outreach Service and seeing & hearing from people who have benefited from our group."

While 'Together with Solace' has proven to be a vital lifeline for those suffering with mental health issues locally, Andy feels that more support is needed for groups that provide support to those struggling.

"To be honest I feel that Mental Health Services are lacking locally and more support is needed for groups like Together With Solace is needed," he said. " Just in the past few weeks we have had members of the public walk through our doors needing Crisis Team intervention.

"On our second incident, our group counselor contacted the crisis team only for person in need of help to be told to make their way to SWAH A/E as nobody was in Omagh hospital to speak to them but it would be the next morning before anyone could speak with them.

"I personally suffering from mental health issues and I have always been told that there is a 24 hour mental health duty officer on duty. On this occasion this seems to not have been the case."

And while the group is hopeful that more support from organisations such as the local council will be forthcoming, they are continuing to plan events and enhance the profile of the group in coming weeks and months.

Andy concluded: "For the future of our group, we would like to see it grow even more than we have in the past year and eventually get our own premises.

"In the coming weeks/months ahead we are planning more events such as a concert, dances, craft fairs, information days and a couch to 5K walking club for beginners with a graduation for everyone who takes part.

"We also aim to meet with local council and elected representatives about what services are and not available in our local area."

"I was delighted to be invited by Together with Solace to take part in their recent coffee morning. It was a fantastic event with plenty of chat, music and poetry to celebrate the first anniversary of their foundation.

"I have to put on record my thanks to their volunteers and supporters for the work they have done in Omagh to bring people together to promote positive mental health and wellbeing.

"In the face of increased mental health challenges, it is invaluable to have this resource right at the heart of our community which is dedicated to building connections and healthy relationships between people."