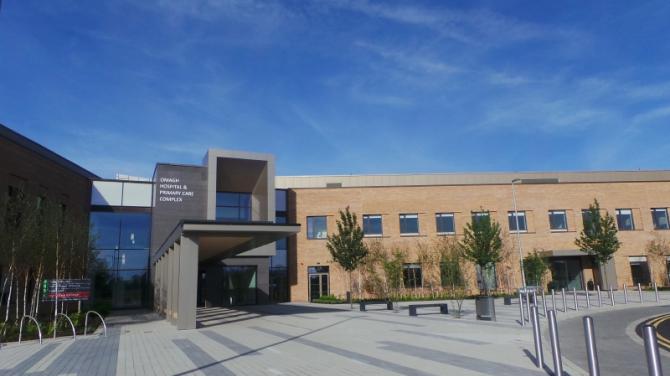 OMAGH will play a greater role in tackling the country's waiting lists, having been named as Northern Ireland’s second regional Day Procedure Centre.

The announcement was made by Health Minister, Robin Swann, where he outlined a range of important initiatives to treat more patients on hospital waiting lists at Omagh Hospital and Primary Care Complex.

The new centre will see seven regional theatre lists per week across urology and general surgery - two specialties with some of the longest waits across the HSC.

This means an extra 1,750 patients across these specialties will be treated per year when fully implemented. In addition 10 regional endoscopy sessions at Omagh Hospital will see an extra 3,000 patients per year.

It is hoped that these additional sessions will reduce waiting lists with the intention of ultimately eradicating them.

Ulster Unionist Councillor, Matthew Bell, has described the annoucment as a "real display of confidence in the hospital and staff."

"In effect that means it has now become a ring-fenced hub for the delivery of day case surgical procedures, supporting greater numbers of patients both locally from the Western Trust as well as from right across Northern Ireland.

“Despite all the political rhetoric from some Parties and the ongoing stalemate after the most recent election, the Ulster Unionist Party is fully committed to tackling the unacceptable waiting lists. When the Health Minister Robin Swann published a five year roadmap last year he said the establishment of a new day procedure would be one of the issues taken forward and I’m delighted that that has now come to fruition and Omagh has been selected.

“The hospital already delivers a wide range of primary, secondary and community care services. It has 3 state of the art day procedure operating theatres and 22 recovery beds – it’s widely considered one of Northern Ireland’s surgical jewels in the crown.

"It currently provides day procedures for WHSCT patients across a range of specialties including general surgery, urology and ophthalmology. It is currently funded for 23 day procedure sessions per week, yet after Robin Swann asked all Health Trusts to ensure that they are fully utilising every square inch of capacity an additional 7 sessions a week are now going to be funded and delivered.

“These additional lists are especially going to focus on urology and general surgery – two specialities with some of the longest waits across Northern Ireland. According to the Minister this means an extra 1,750 patients across these specialities will be treated per year when fully implemented. These will include many red flag cancer and other time critical cases. In addition 10 regional endoscopy sessions at Omagh Hospital will see an extra 3,000 patients.

“This is a real display of confidence in the hospital and all the staff that work within it. Becoming only the second such centre in Northern Ireland, after the first was announced in the Lagan Valley Hospital in 2020, I’m thrilled that Omagh Hospital will now be taking on an even greater role in the overall delivery of health care here.”

SDLP West Tyrone MLA., Daniel McCrossan, has welcomed the announcement of Omagh Hospital as a regional day procedure centre, but has warned that a long term sustainable solution to the crisis in the health service can only be secured by a functioning Executive.

Mr McCrossan said: “This announcement is good news for Omagh Hospital which will become the North’s second regional day procedure centre. We now know from experience that this model delivers good outcomes for patients and enhances the range of services which can be offered.

“While I welcome this development, it’s important that people realise that this is no silver bullet. Hospital waiting lists will continue to grow, people will continue to get sick and live in pain unless we have a long term budget and strategic intervention for health services. That is being held to ransom by the DUP’s boycott of the Assembly. DUP MLAs need to be very clear with the public – their political games will make things worse for everyone waiting on care or treatment at one of our hospitals.”

"Unison welcomes this announcement of additional funding for the additional surgeries to help ease waiting lists in Northern Ireland. We also welcome the fact that it is going to be done in-house, with NHS staff and NHS consultants. It is vitally important that the resources are found within NHS to facilitate these plans.

"It is very welcomed, as at present the local hospital is not fully utlised, and it makes good businesses sense it see it used in this manner, and with waiting lists the length they are, it has to be welcomed."

The Western Health and Social Care Trust (Western Trust) has also welcomed the announcement, stating that it represents a "significant step" forward in the transformation of health care to tackle waiting lists for urology, general surgery and endoscopy, which will benefit patients throughout the region.

Geraldine McKay, Director of Acute Services said: “This is great news for the Western Trust and in particular Omagh Hospital and Primary Care Complex.

"We look forward to working with the Department of Health and our clinical and nursing staff to implement this.”