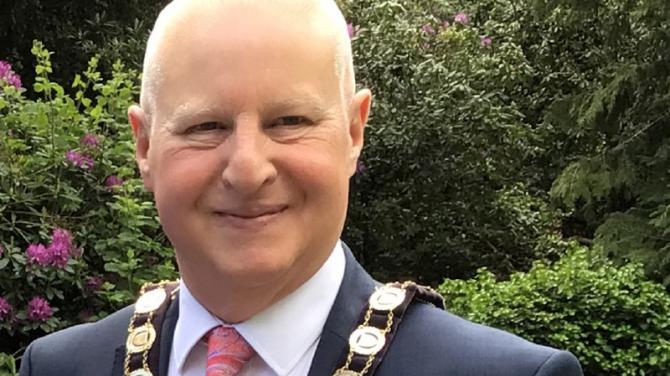 THE outgoing chairman of Fermanagh and Omagh District Council has reflected on his term in office telling members he leaves the role with "a deep sense of satisfaction.”

In his departing remarks, councillor Errol Thompson acknowledged the difficulties caused by Covid-19 but felt council has emerged “a stronger and more resilient organisation.

“The pandemic dominated our lives, however recently there has been a semblance of normality," he said.

"I look forward with a little more confidence to the recovery of our district. Tourism and environment in this district are inextricably linked and the preservation and promotion of our stunning natural heritage I am pleased to endorse.”

Councillor Thompson referred to his pride at launching the council’s climate change and sustainable development action plan - ‘Restore Revive Thrive’ - the first to be spearheaded by a local authority in Northern Ireland.

"This endorses the commitment made in 2021, with 17 sustainable development goals," councillor Thompson continued.

"We have a wonderful tourism product and through continued support for the sector, council recognises this huge importance to the local economy.

"As restrictions ease, I’m confident our tourism and hospitality industry will play a key role in the recovery of the district."

He was encouraged to see the return of events such as the Omagh Half Marathon and the classic fishing festival and looks forward to the Sperrin’s Walking Festival and Festival Lough Erne.

St Patrick’s Day also returned for the first time since 2019 and while there was a different feel "it still nonetheless an extremely enjoyable day for the whole community.”

The former chair spoke of launching the ‘Everybody Belongs’ campaign, demonstrating council’s commitment to valuing all residents in the district by "striving to oppose racism, sectarianism and discrimination irrespective of background, identity or ethnicity.”

Recognition of accomplishments is a major part of the role of the chair, said councillor Thompson who recalled hosting: “All cultures, identities, traditions and sporting clubs, including civic receptions for former County Tyrone GAA manager Mickey Harte and Clogher Valley Rugby Club, both richly deserving of such an accolade.”

He was saddened events in Ukraine "deprived me of the opportunity to host children from villages in and around Chernobyl as we normally would have done. Our thoughts are with the people of the region at this difficult time.”

A number of important dates fell within councillor Thompson’s term in office: “Not least the centenary of the formation of Northern Ireland as well as the Queen’s Platinum Jubilee, a remarkable achievement.”

He thanked the council’s dedicated workforce alongside the chief executive and senior management team for their invaluable professionalism, leadership, guidance, and support.

Special thanks went to vice-chair councillor Chris McCaffery who: "Carried out his role with dedication. I’m very grateful for his support and for deputising for me when it was impossible to be at two places at the one time.”

Councillor Thompson added: “I extend my gratitude to the press for their coverage of my term in office. The freedom of the press is one of the great strengths of a democracy, founded on the principles of fairness and respect.

"It’s something we should not take for granted.”

He concluded: “I consider the opportunity to be chair and serve all in the district as a great honour. There are no doubt, challenging times ahead with a great deal of uncertainty and a deepening cost of living crisis.

"There is potential for further destabilisation. It is important we remain positive.

"I end my term with a deep sense of satisfaction. I offer my best wishes to the incoming chair and vice chair and hope they find their term as enjoyable and fulfilling as I have done.”