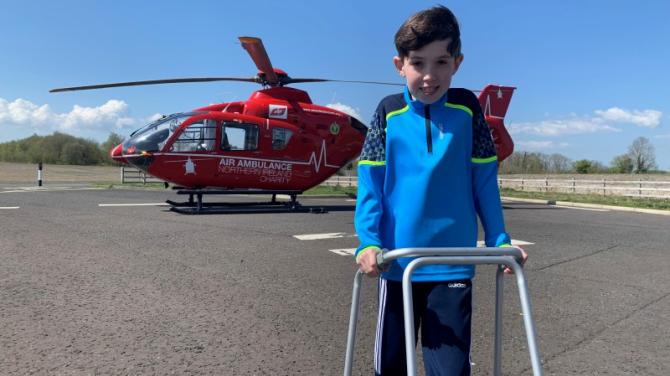 MICHAEL McCaughey from Beragh never thought he would require treatment from the team on board the air ambulance, just six weeks after his school, St Oliver Plunkett PS held held a fundraiser for the Air Ambulance NI charity - but that is what happened on the afternoon of March 29.

Whilst playing at school, Michael was involved in an incident and the ambulance service was called. The Northern Ireland Ambulance Service (NIAS) sent a Rapid Response Paramedic and an Emergency Crew to the school to help Michael in his time of need.

The Paramedics and EMT quickly assessed and provided initial treatment to Michael. The Rapid Response Paramedic, while treating Michael, decided that he would benefit from the advanced care and management that could be provided by the Helicopter Emergency Medical Service (HEMS) and asked NIAS Control to task the Air Ambulance and HEMS team to the incident.

Landing in the local football field, the medical team reached Michael and immediately administered advanced pain relief before undertaking bone realignment of his fibula in the school playground.

Michael was then flown to the Royal Victoria Hospital (RVH), Belfast, in a journey time of less than 20 minutes, landing on the helipad on the roof before being transported to the Royal Belfast Hospital for Sick Children. Michael spent four days in hospital and has since been recovering at his home, receiving physio treatment and gradually building up his leg strength.

Four weeks after the incident, Michael and his family got the opportunity to visit the Air Ambulance NI base where he met one of the HEMS team that responds to calls like this. Michael’s parents Michael and Siobhan said: “We would like to thank the Northern Ireland Ambulance Service and the HEMS team for all they did for Michael, we will be eternally grateful for their assistance that day.

"It was brilliant to visit the Air Ambulance base and personally thank the medical team.

"We have always known about the air ambulance, but it is not until you need them that you realise what an incredible service it is.”

Damien McAnespie, Air Ambulance NI fundraising manager, said: “It was fantastic to meet Michael after what must have been a very scary experience for everyone.

"I remember speaking to Michael and his class only weeks prior to his incident and informing them what types of incidents the air ambulance team go to, how they can help individuals and how it takes everyone’s support to keep it flying as it is a charity.

"I am delighted to hear that Michael is continuing to make a terrific recovery and I wish him all the very best as he prepares for his next chapter of life in secondary school.”

Michael’s family have chosen to raise funds for the Air Ambulance NI charity and have planned a coffee morning event on Saturday, June 25 from 10am to 3pm in the Flaxmill Centre, Drumduff, Beragh.

The McCaughey family would like to invite everyone and any donations to the Air Ambulance NI Charity would be gratefully accepted.

From the inception of Air Ambulance Northern Ireland in July 2017, the HEMS has been tasked 2,916 times. The HEMS team attend patients who are seriously ill or injured, bringing emergency pre-hospital care direct to the casualty with the aim of saving lives, brains and limbs. Approximately 10 per cent of these taskings have been to paediatrics like Michael.

The charity cherishes connecting with former patients and patient families. If you, or one of your family members, have been treated by the HEMS crew please get in touch with Air Ambulance NI by calling 028 9262 2677.

Air Ambulance NI aspires to raise £2m each year, or £5,500 a day, to sustain and develop this service and public support is crucial. Adults and children can join the charity’s membership initiative, Club AANI, by visiting www.airambulanceni.org or calling 028 9262 2677.