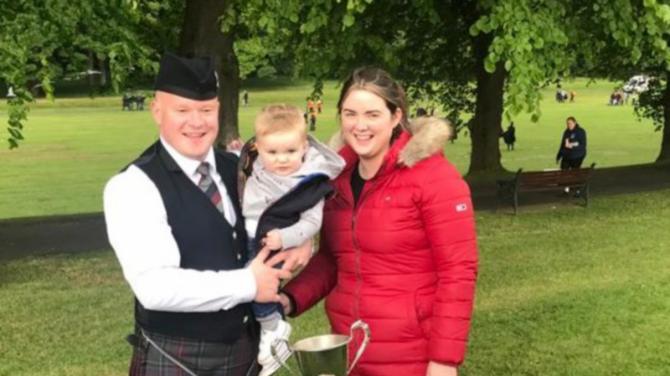 A LOCAL pipe major was left 'reeling' with delight after his band lifted a top prize at the UK Pipe Band Championships in Lurgan at the weekend.

Kyle Duddy, a talented pipe major from Newtownstewart who currently leads Clogher and District Pipe Band, was thrilled when the band came out on top in Grade 3A at Saturday's event, having successful fought off stiff competition from no-less 15 other bands from across the UK.

And the occasion was special in more ways than one - for the band, it was their the first major competition win and third major competition at grade 3A championship level, and for Kyle, it was his first substantial win as a pipe major.

As the second major pipe band championships of 2022, the Lurgan stage saw the band's piping and drumming prowess well-and-truly proven, emerging as front runners ahead of second place Tullylagan and third place McNeillstown.

And as the man at the helm, Kyle admitted that the weekend win was an "emotional one" with some tears of joy shed - and it was made all the more special as his one-year-old son, Carson along with partner Charlene, where there to cheer him on!

Kyle explained: "It was a special moment and I will admit there were some tears shed when the results were called out. It was a brilliant moment for both myself and the band, and together we have overcome many challenges to achieve this success.

"Clogher and District was reformed in 2017, and this was our first major championship win. It was our third time competing at championship Grade 3A level, and we won this grade on Saturday. This is a fantastic achievement and we were up against stiff competition from bands across the UK, including five from Scotland. To come out on top is something we can all be immensely proud of. I'd like to dedicate this win solely to the band for their hard work and commitment - this one is for them!

"Of course, it was also special for me as it was my first win as a pipe major. The job consists of everything from laying out the music, tuning the pipes and everything in between, so to see the band go on to win was an excellent feeling.

"And the occasion was made all the more special as my one-year-old son, Carson was there watch with my partner, Charlene. She shares my passion for piping and has great patience for what I do, especially considering the hours that have to be put both inside and outside of the band hall."

Kyle is no stranger to the world of piping, having learned at the tender age of 10 with Sinclair Memorial Pipe Band, Newtownstewart, and making his first foray into the world of competition piping with Gortaclare Pipe Band, taught by Norman Cochrane.

He later moved to Grade 1 competition band, Cullybackey, developing a stellar reputation as a talented and level-headed piper, before being invited to be pipe major of the newly reformed Clogher and District in 2017, by none other than band stalwart Robbie Trimble.

And while Kyle is immensely proud to of his achievement with Clogher and District, he said it wouldn't be possible without the sheer hard work and dedication of everyone involved.

Paying tribute to the dedication of the band, Kyle said: "I dedicate this win solely to the band, and I praise the immense hard work and dedication of every player who has really put their all in since we met back after Covid-19. I'd also like to pay tribute to pipe sergeant, Alan Donnell, who was on hand to offer advice and keep me settled on competition day! And also to leading drummer, Stephen Young, from Castlederg, and lead tenor drummer, Jonny Dixon, who have built up an extremely talented drum corps and bass section.

"Of course, there are others working tirelessly in the background as well, such as committee members and parents. Without them the band wouldn't be going as well as it as at the moment, and the support of everyone is very much appreciated.

Kyle added: "This gives the band great confidence going forward. It was very challenging to get everything up and going again after Covid-19, but they stepped up to the mark and truly excelled.

"It is also very encouraging that there has been some interest already from people looking to join the ranks, and the door will be open for new members come September!"