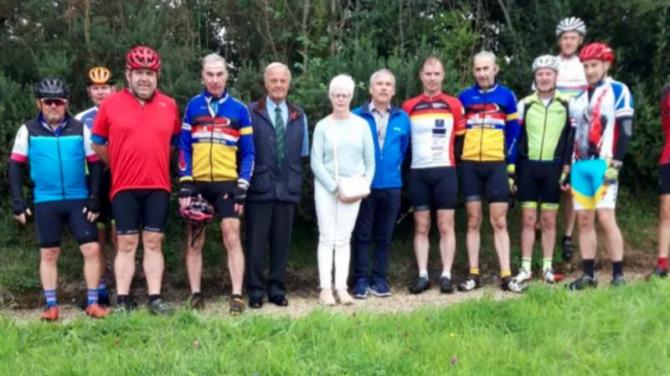 FIVEMILETOWN Royal British Legion Veterans Cycling Club, in conjunction with Lisnaskea UDR Association, are in preparation for their new challenge for 2022.

Last year, they cycled around the 27 graves of those from four UDR who were murdered by the Provisional IRA, raising over £4,000 for SEFF.

They were met by family members at most of the graves. The sense of appreciation from the families that the loss of their loved ones, and their sacrifice would not be forgotten had a lasting impact on the cyclists.

With a number of members having served in six UDR, participants felt it would be fitting to repeat the challenge visiting the 43 graves of those from the Battalion who were murdered.

Over the last few months, the Cycling Club has been in training and completing a recce of all the gravesites. As there are 43 graves spread over a larger area, the challenge of cycling over 140 miles will be completed over 2 days.

It will take place on July 8 to 9, and donations will made will support the work of SEFF and MAPS who both do fantastic work in the County Tyrone area for the UDR families of those murdered.

Speaking ahead of the challenge, SEFF's Director of Services Kenny Donaldson said: "Fivemiletown RBL Veterans Cycling Group first developed this concept of Remembrance in Fermanagh and late last year visited the graves of all those UDR personnel who were murdered within 4 UDR and who were buried within the County. The experience was extremely positive with high levels of engagement from families who were present at their loved one's graves when the Cycling team moved throughout the County, have the families are the centre of the process was the key issue.

"£4,000 was raised and we as an organisation were privileged to be the recipients, this time around any fundraising achieved will be split between SEFF and MAPS, Omagh who carry out very import Welfare orientated work for former members of the security forces".

"This time around the Cycling Team embark on an even greater challenge, covering the landscape of Tyrone (which will take two days) as they give honour to those 6 UDR personnel murdered. Again this Project is capturing the imagination of the former security force community but also the broader community".

For details of the upcoming initiative and to contribute to the fundraiser, please go to: https://www.gofundme.com/f/

Richard Scott and Margo Hetherington (MAPS) and Nevin Brown (SEFF) will be liaising with family members who would like to attend their loved one's grave when the cyclists arrive.