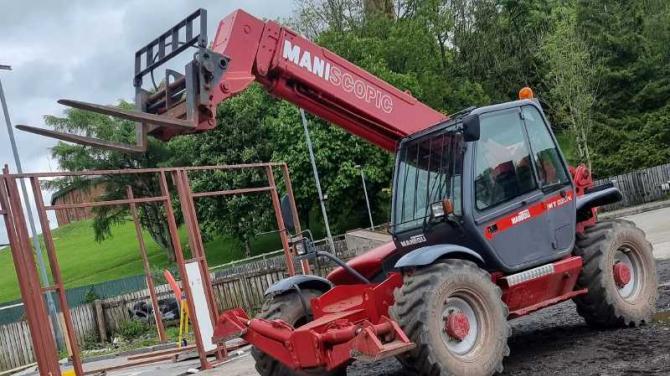 THE theft of a telehander worth several thousand pounds near Fintona has prompted a call for an increased police presence in rural areas.

West Tyrone MLA.,Tom Buchanan was speaking after a Manitou telehandler, which had two forks on the front and a stainless-steel step, was stolen from the Loughmuck Road between 5pm on Friday, June 17, and 8.20am on Monday.

Omagh are appealing to anyone who witnessed suspicious activity to come forward on 101, quoting reference 422 of 20/06/22.

The incident follows an ongoing increase in rural burglaries, thefts and robberies in the district.

According to PSNI crime statistics, last year (2021-22) there were 433 incidents of rural theft in Fermanagh and Omagh - an increase of 34 on the previous year (2020-21). Currently, the district has one of the highest rates of rural thefts in Northern Ireland.

West Tyrone MLA., Thomas Buchanan, has heavily condemned the recent plant machinery theft, and has called for both the general public and Police to do that they can to both report and deter rural crime.

"This is another example of a crime that seems to be very much at the fore of in rural areas in West Tyrone. Farm and plant machinery appear to be sought after targets for thieves, and we all know the detrimental financial impact this has on the victim.

"Of course, there is also a knock on impact as these kinds of machine serve a useful purpose and when they are stolen, work is interrupted.

"There is far too much of this happening in rural areas, and as we have seen from recent statistics, the rural crime rate is steadily increasing. This is very worrying and it points to a definite need for action to be taken, sooner rather than later.

"In terms of this recent incident, I am calling on anyone who has any information, no matter how small, to pass it on to police. As a community we must step up and do what we can to both prevent this kind of thing, and assist police in their enquiries.

"Going forward, it is very important that the rural community is extra vigilant regarding potential thieves. Report suspicious activity to police as it happens. If you see a car that isn't local to the area and acting suspiciously, it could be someone sizing up what they can steal - it is important to alert police if something doesn't feel right.

"Having spoken to local police on these issues, I have called for more of a sustained police presence in rural areas, to act as a deterrent for thieves. Yes, rural areas are isolated, but going forward we need to see more police on the ground to ward off opportunistic criminals."