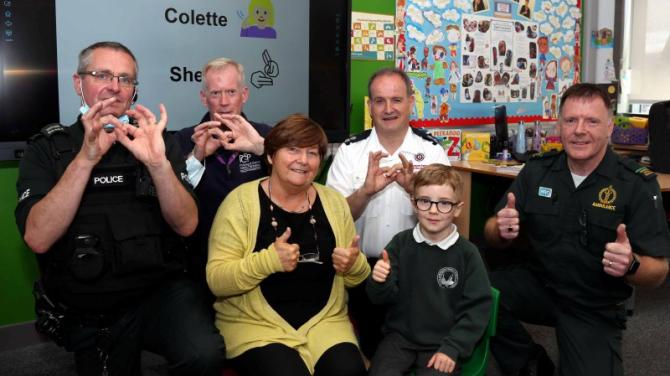 PRIMARY Two pupils from Omagh Integrated Primary School have been learning sign language this year and are keen to use the skill to support their classmate, Callum, who is hearing impaired.

And the lessons are so popular that children have even started using sign language outside the classroom, and has opened up a wider conversation about the specific challenges D/deaf people face in everyday life.

On Monday, a special event was held at the school where pupils were able to showcase their sign language skills, which have helped to normalise the learning experience for pupils such as Callum, who have varying degrees of hearing loss.

And the efforts of pupils have even inspired none other than Strictly Come Dancing's Giovanni Pernice, who danced with a deaf actor to win last year's competition - personal message was recorded and played to Omagh Integrated pupils, with the star praising pupils for "being so inclusive"!

Also in attendance at the hugely successful event was Colette McMahon, British Deaf Association’s ‘Deaf Roots and Pride’ project coordinator, and representatives from the PSNI, Fire and Ambulance Service, who were encouraged to learn more about sign language.

Natasha Eccles, a P2 teacher, said that her pupils are now more aware of other ways in which they can use sign language in everyday life, including communicating with older relatives who may be hard of hearing.

Reflecting on the event, she said: "The event was all about trying to raise deaf awareness in both our school and in the Emergency Services. We were taught key signs that we could use in emergencies, as well as basic signs that can be used in everyday life.

"During the assembly the pupils signed out 'You've Got a Friend in Me' and 'Lean on Me', which was an opportunity to showcase the signs they have been learning.

"The event was brilliant and it was great to see such support. In the future we hope to hold further events and initiatives to help raise awareness of the specific challenges D/deaf people face in everyday life."

Speaking on the event, Sergeant Johnny Hammill, of the PSNI, said: I think its only right that when we are working with the local deaf community that we also learn a number of signs, so that we can communicate with them in their own language of choice."