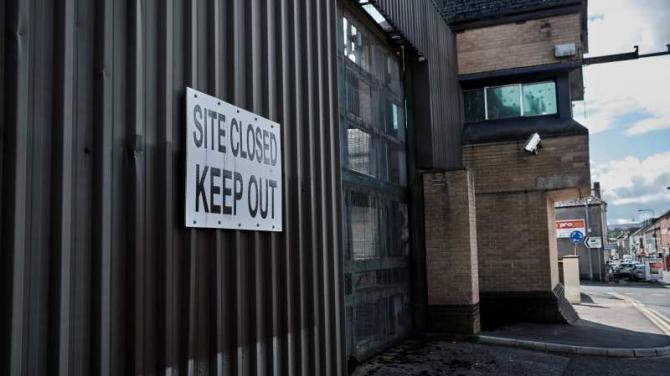 AN increase in housing stress in Castlederg has led to the NI Housing Executive (NIHE) expressing in interest in acquiring the site of the former police station in the town.

As first revealed in last week's Strabane Weekly News, the housing body is proposing to develop the land at the vacant station - located on Castlefin Road - into a site for social housing.

Apex Housing Association were subsequently nominated to progress the site and are currently in the process of carrying out their own feasibility studies, with Derry City and Strabane District Council also seeking "a potential collaborative approach" for a housing led regeneration plan for the site.

The development was confirmed by Communities Minister, Deirdre Hargey, in response to an Assembly question on the issue.

The disposal of the station, alongside two other border stations in Aughnacloy and Warrenpoint, was initially halted in 2018 due to uncertainty presented by Brexit.

Last September the PSNI confirmed it was back on the market due to the "changing circumstances" of the UK's exit from the EU, with an internal trawl initiated among public sector bodies.

He previously submitted a successful motion to council supporting the regeneration of the town, and to consult with the Policing Board regarding the dilapidated PSNI barracks which he described as a "prime town centre location".

Following confirmation that the station site is now being earmarked for social/affordable housing as part of wider regeneration plans, further details have been revealed via Paul Price, the department's director of Social Housing Policy and Oversight.

In a letter to West Tyrone Sinn Féin MLA., Maolíosa McHugh, he explained: "The site of the former PSNI barracks in Castlederg was originally trawled via the ‘Disposal of Surplus Public Sector Property’ (D1) process back in February 2017.

"As there was no projected housing need at that time, the Housing Executive did not express an interest in the site for new social housing.

"However there has been an increase in housing stress within Castlederg, and the projected need is for 21 new social homes for the period 2021-26.

"The NIHE seeks proposals for new build schemes from Housing Associations through an annual commissioning prospectus. This focuses on areas of housing need.

"Through this the NIHE will seek any suitable development proposals from housing associations which can help to address the need in Castlederg.

"Housing Associations can respond to this by liaising directly with the PSNI - as the PSNI site is now on the open market."

Councillor McHugh described the plan as "fantastic news" and the culmination of many years of campaigning and lobbying.

“Confirmation from Communities Minister Deirdre Hargey that Apex Housing is taking forward the Housing Executive’s expression of interest to develop social/affordable housing on the site, in a collaborative approach with council and our wider regeneration plans, is fantastic news," he said.

“This is the culmination of many years of campaigning and lobbying by Sinn Féin representatives to demilitarise the base and utilise it for the social and economic regeneration of the area.

“This includes Maolíosa McHugh MLA directly lobbying the Department for Communities for social housing to be developed on the site.

“Last May, I also received unanimous support for a motion to Derry City and Strabane District Council calling for a re-focus to be brought to the process to regenerate Castlederg including to further consult with the Policing Board on the disposal of the site for this purpose and to seek to avail of further regeneration opportunities including departmental buy-in and funding.

“The buy-in by the Department for Communities, the Housing Executive and Apex Housing show the benefits of the proactive approach now being taken by council."

He added: "The benefits of this proactive approach have been further reflected in council’s successful £6.4m application to the Levelling up Fund for the Derg Active Project which will include: construction of a new full size floodlit 4G pitch at Mitchell Park, exercise stations, upgrade to the play park at Derg Castle Park, new walking routes and much more.

“While many challenges remain in the efforts to regenerate Castlederg, good progress is being made which we can continue to build upon in the time ahead."