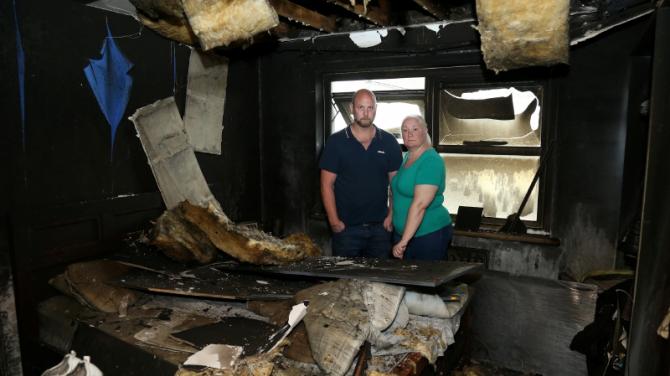 A NEWTOWNSTEWART family are still coming to terms with a devastating fire that saw the interior of their home totally destroyed.

On Friday evening, a fire broke out at the Walter's family home at Davis Crescent, Newtownstewart, after a phone charger exploded and set the house alight.

The blaze, which required the assistance of three local Fire Service appliances and a team of fire fighters with breathing apparatus to bring it under control, saw virtually all of the family's possessions destroyed.

However, following a period of uncertainty for the Walters family, which consists of Amanda and Freddie and their three teenage daughters, they have since found a new home in Newtownstewart and money is currently being raised to help them rebuild their lives. In addition to a live 'Go Fund Me' page, in September a special fundraising event in aid of the Walters will be held at the 2000 Centre.

According to Freddie, the incident is a sobering reminder of the importance of keeping an eye on electronics, which can all too easily become fire hazards.

"We are still totally lost for words and never imagined that something like this would happen to us," he said. "We had no idea that a charger could cause something like this, especially when it was a genuine Apple one that we thought would be safe. It just goes to show how household electronics can easily become major fire hazards.

"It needs to be highlighted how important it is to keep plugs off when they aren't being used, and how dangerous it can be to keep a phone on the charge overnight.

"Another thing is loft space. You are actually supposed to keep loft space empty, but few, including ourselves, do. One of the firemen said there was actually stuff falling out on top of them as they were going upstairs, because the fire burned through the ceilings so quickly.

"It is also extremely important to having contents insurance for the stuff in your house. We have lost basically all our possessions, nothing is salvageable upstairs and very little was left downstairs. Luckily we have managed to find another house in Newtownstewart, but we are really starting from scratch."

While Freddie wasn't at home at the time of the incident, his wife, Amanda, described in detail the horrifying moment when when their beloved family home was reduced to little more than a smoke-damaged shell.

Shortly after hearing a "bang" from one of the bedrooms, Amanda was in disbelief when one of her daughters ran into her room, shouting that the house was on fire.

She went to investigate to find that the bedroom was engulfed in flames, with billowing smoke so heavy that they had to evacuate the house immediately.

The Fire Service was subsequently and were on the scene within eight minutes. The fire was dealt with by 2.43am, but by that time intense smoke damage had been caused, leaving the family homeless.

Freddie continued: "The whole situation just goes to show how easily this kind of thing can happen. It's mind-boggling how quickly a fire can spread, within minutes the smoke was choking them.

"Of course, we are just glad that no one was injured in the blaze, and we have since found another house in Newtownstewart for the mean time. Repairing the fire damage could take up to 12 months, the damage is just that bad."

A Go Fund Me page has been set up to help the Walters family deal with the aftermath of the accident. This can be accessed on cousin, Sharon Rutledge's Facebook page, or can be found by typing 'Go fund Amanda, Freddie and Children' into the search bar.

A special fundraising event is also being planned for September 4 at the Newtownstewart 2000 Centre, with BBQ and raffle. Further details are to be released about the event in coming weeks.