Orange Lodge all the way from Sussex takes part in Omagh's 'Twelfth' parade! 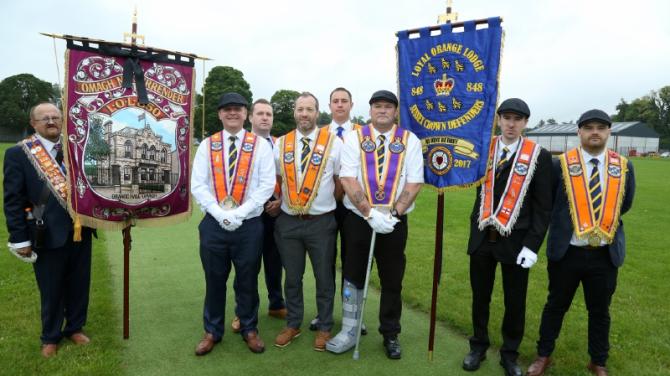 TYRONE'S main 'Twelfth' demonstration attracted Orange lodges from far and wide - but none came as far as members of one Orange lodge from Sussex, England!

LOL 848 Sussex Crown Defenders proudly marched with their banner on the streets of Omagh on Tuesday, making them the first English lodges to so in Omagh.

And despite the distance, the seven members who attended felt right at home, having arrived on the July 11 receiving a warm welcome from local councillors, experiencing first class hospitality in the Silverbirch Hotel, and more poignantly, visiting the Omagh Bomb Memorial.

Of course, the main event - Omagh's 'Twelfth' - didn't disappoint, with the members proudly marching the streets of the town behind Mountjoy Temperance LOL 850, and taking in the sights and sounds of the local demonstration.

And the lodge has more connections with West Tyrone than simply the all-encompassing brotherhood of Orangeism - it's worshipful master, Peter Williamson, hails from Castlederg, while another of its officers, Simon Bell, is a native of Omagh.

Meanwhile, the majority of members in the Lodge are English or Scottish - and three of the Lodge Brethren who made the trip are Englishmen, together with another Englishman joining Lodge on parade from a nearby Portsmouth Lodge.