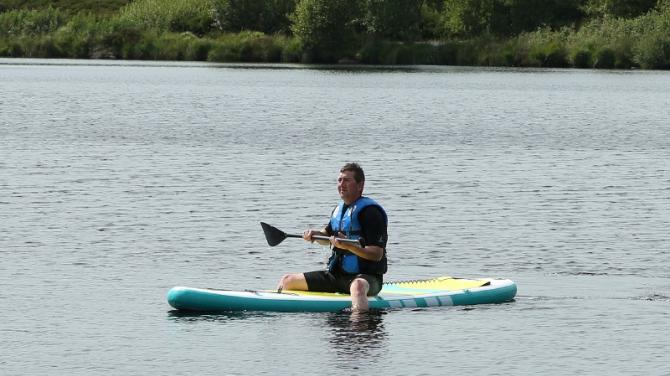 TEMPERATURES in Tyrone soared into the high 20s on Monday, as a heatwave continues to make its way across the country.

Sunbathers across the county made their way to local beauty spots to make the most of the warm weather while it lasted, with the high temperatures continuing yesterday and the rain expected to return today (Wednesday).

Ice cream dealers have been reporting a strong trade as people flocked for some cooling refreshment as temperatures continued to rise.

Local butchers have also been reporting a soaring trade as people prepared to barbecue in the heat.

The highest temperature ever recorded in Northern Ireland was 31.3c in Castlederg last year.

Northern Ireland had its hottest day of the year so far on Sunday with 27.7c recorded in Armagh, and temperatures on Monday did their best to exceed that.

BBC weatherman, Barra Best, confirmed that on Monday, Dublin record the highest temperature recorded anywhere on the island of Ireland in 135 years with 33.1c.

The soaring temperatures comes as the Met Office issued the first ever red warning for exceptional heat across parts of England.

While the same warning was not issued to Northern Ireland, the risk to public safety was still apparent as the Northern Ireland Ambulance Service (NIAS) said it was expecting an increase in calls and appealed for the public to only contact them in the case of an emergency to "help protect the most vulnerable".