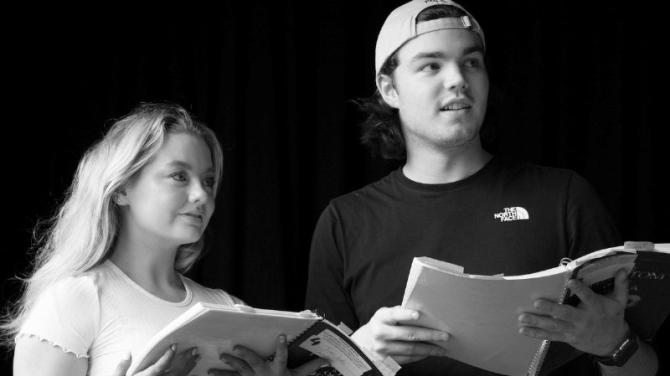 A TALENTED Omagh actress is gearing up for her dream role in the up-and-coming performance of 'The Phantom of the Opera' at the Millennium Forum.

In August, Tirna-Kate Fox will step on stage as Christine in the much-anticipated performance, which features a 40-strong cast a host of talent from near and far.

The 19-year-old's acting exploits are well-known locally, having studied acting and singing with Leanne Daly at Hazelwand Theatre school where she embarked on many iconic roles such as Maria in ‘The Sound of Music’, Adelaide in ‘Guys and Dolls’ and Eponine in ‘Les Miserables’.

However, Christine is one of her dream roles, and is her first for Millennium Forum Youth Productions.

The show takes place from August 3 to 6 at the Millennium Forum, and tells the story of a masked figure, played by Aodhan Kehoe, who lurks beneath the catacombs of the Paris Opera House, exercising a reign of terror over all who inhabit it.

He falls madly in love with an innocent young soprano, Christine, and devotes himself to creating a new star by nurturing her extraordinary talents and by employing all of the devious methods at his command.

With rehearsals for the upcoming dates in full-swing, Tirna-Kate said being involved with the production has been "absolutely amazing."

"It's hard to put into words how absolutely amazing it has been to be involved in this show. Audiences are truly in for a treat, and it has been a real privilege to work with such a fabulous, talented cast.

"The Phantom of the Opera is spectacular and it's one of the most phenomenal musicals in history. It's the longest running shows on the West End, and also one of the most challenging.

"It's so phenomenal to be apart of it and to play the main role of Christine. This is my dream role and always has been, and it's the one role, that all sopranos want. It's an amazing chance to get."

Having acted on stage since the age of our, Tirna-Kate is no stranger to the the world of theatre. However, despite her wealth of experience, she said she was "blown away" when she was offered the lead role in The Phantom of the Opera following the audition process.

"I go to Hazel Wand theatre school. My singing and acting teacher is Leanne Daly and she knew that Christine was my dream role from no age, so when there were auditions coming up in Derry, we both knew the opportunity couldn't be missed.

"I emailed the Millennium Forum to put my name down, and I got an audition. After that I got a call back and a day later I got the email confirming that I got the part of Christine! To say I was over the moon was an understatement!

"It's been an awful lot of hard work, late nights and early mornings, but it will all be totally worth it. Overall, it's great to be involved in such professionalism and with such immense talent in terms of the cast."

And Christine isn't the only role Tirna-Kate will be playing in coming months. Following The Phantom of the Opera, she is set to once again 'tread the boards' as Marie in West Side Story and as Rizo in Grease, both closer to home at the Strule Arts Centre, Omagh.

Certainly, the fledging actress has much to look forward to, describing the feeling of being on stage as "magical".

"Being up on stage is an indescribable feeling," she said. "It gives you such a rush, and you aren't yourself in that moment. Everything around you is just magical. It's just magic, and the adrenaline and thrill you get from it is just amazing.

Tirna-Kate concluded: "I want to make this a lifelong thing, and I would love to perform professionally in stages over in London some day."