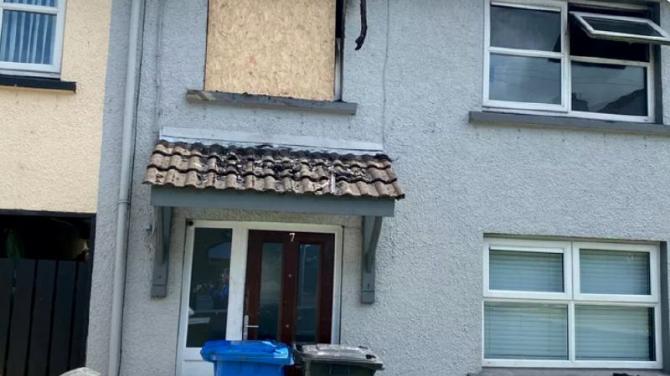 THE victims of a devastating house fire in Newtownstewart have said they have been "blown away" by generosity shown by the local community.

The Walters family, which consists of Freddie, Amanda and their three teenage daughters, were last week displaced from the Davis Crescent home after a fault phone charge exploded, causing a fast-spreading fire that destroyed the majority of their possessions.

However, despite being left without a home and with little more than the clothes on their back, the family have since been helped back on their feet by supportive members of the Newtownstewart community and beyond.

The local community association quickly helped the family attain temporary accommodation in their hometown, while two separate fundraisers have been set up, which, to-date, have collectively raised over £1,000.

Meanwhile a family fun day is being planned for September 4 at the Newtownstewart 2000 Centre to help raise further much-needed funds for the family.

Speaking on behalf of his family, Freddie Walters said they are immensely grateful for all the support they have received so far.

"We have been blown away by all the support we have received, and we are finding it hard to put into words our appreciation," he said. "From clothes, monetary donations, furniture, and temporary accommodation, from the moment the fire happened we have been supported.

"The willingness of people to pull together to help a family out has been amazing. There have been people washing clothes for us, helping us with new furniture, setting up fundraising pages, everything. We are truly humbled.

"Without a doubt, if we didn't have the help of different people and various agencies, things would have been so much more difficult. It was nice to see the community coming together to help us out, and even strangers have helped in any way they can.

"In times like these the local community pulls together and you realise that there is a fantastic community there, even down to the simplest things."

Following the devastating accident, which happened after a charger overheating and exploded, Freddie said he is keen to spread a message of fire safety and has urged others to be mindful of the danger posed by household electronic devices.

"This whole situation is making people aware of just how dangerous household electronics can be. The amount of people that have came to us saying that they leave phones on the charge overnight, or leave plugs turned on is mind-boggling.

"It's been nice to be able to speak to people and to make them aware that that can happen. The fire in our house started when a genuine charger exploded. Just because it was a genuine charger doesn't mean it can't explode or overheat. Anything that can be charged can overheat.

"I have also spoken to two local firemen lately and that many of the incidents they attend are caused by the overheating of chargers and plugs.