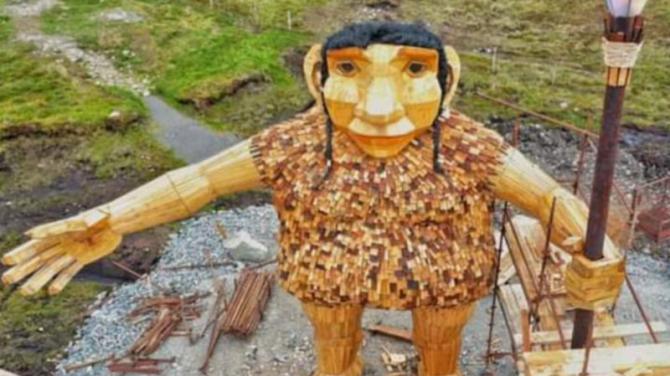 THIS weekend people will be undertaking the yearly tradition of walking to the summit of Mullaghcarn Mountain, with this year's 'Cairn Sunday' walk marking the 25th anniversary of the annual activity.

The annual walk takes place in the last Sunday in July, and this year will be no different - and walkers will be joined by new 'giant' friend to greet them when they reach the peak!

The new giant sculpture at Mullaghcarn is one of a series of giants in the Sperrins, which will be launched soon by council. The walk will start from the forest cafe at 10am, and everyone is welcome.

A spokesperson said: "It will be great that participants taking part on our traditional 'Cairn Sunday' will see what ongoing progress has been made in their construction! Our ancestors would marvel at the magnificent addition to the summit!

The walk will start at the 'Trail Head' information panel, beside the Cafe building, and follow the purple waymarked 'Mullaghcarn Trail' signs. The walk will take around three hours.

The walk is on a tarmac and gravel terrain, but it should be noted that the trail’s gradient can be quite challenging, particularly towards the end of the route. Dogs are very welcome, but owners should keep them on a lead. Parking is free at the main car parks and toilets are on site.

The tradition of climbing to the top of Mullaghcairn is thought to date back over 1,000 years.

Cairns have been used from Prehistoric times to present. The act of adding a stone to the cairn, is a deep rooted tradition, that by adding this rock you are preserving the integrity of the cairn, referencing the age- old practice of people, over generations, carrying stones to the summit to add to the cairn there.

It is believed that the cairn marks a place regarded of great religious significance; perhaps a burial place.

The practice of climbing Mullaghcairn is likely to have had a pagan origin; historians detail how people sought to be closer to their gods.

The introduction of Christianity saw the nature of the arranged climb to the top of Mullaghcarn become an annual day of pilgrimage.

Blueberry Sunday’ as it was to be known was marked by participants performing religious practices at the summit.

Through time, ‘sports days’ became a feature there. Activities including berry picking, eating and drinking, singing and dancing enhancing what had become a notable annual occurrence.

The pilgrimage and subsequent festivities appealed to all age groups.

Notably, there were those who regarded attendance an ideal ‘courting’ or matchmaking’ opportunity; it was a place where lasting good relationships began!

In 1997, 300 hardy participants climbed Mullaghacarn on the last Sunday of July.

In doing so, they revived a tradition that had been lost in time. ‘Cairn Sunday’, as it is now known, is about more than participating in a physical activity; it brings a community and its visitors together in the beautiful picturesque Gortin Glen Fores Park landscape.