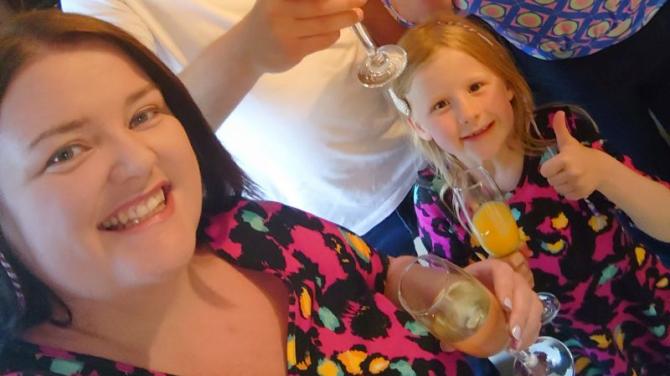 A GARVAGHY woman is still on a high after winning a life-changing £100,000 in the Downtown/Cool FM 'Cash Call'!

Laura Monteith, who is originally from Seskinore but has been living in Garvaghy for six years, answered the winning phone call on Friday evening in disbelief that it was none other than presenter radio John Kearns.

While she was initially convinced that it was a family member trying to "pull a prank" on her, Laura's initial doubt turned to elation when she was asked to name the winning jackpot amount - and she correctly rhymed off '£100,000' to claim the extraordinary prize.

And better still.... was Laura's later revelation that while she regularly enters the infamous 'Cash Call', on Friday she had forgotten to do so until she was reminded via the family WhatsApp group that the £100,000 jackpot was up for grabs.

"The whole thing was completely crazy and totally unexpected," she said. "To be honest it didn't fully sink in until I heard it back on the radio. You just go into a state of shock and find it hard to take it all in.

"I had been doing it for a couple of months, but on this particular day I had totally forgotten about it. It was only when my brothers were putting screenshots of the 'Cash Call' amount - £100,000 - into the family group WhatsApp that I decided to enter. I'm so glad I did.

"It's was certainly surreal hearing John Kearn's distinctive voice down the phone, and as any person who has received the 'Cash Call' will know, it's incredibly nerve-wracking saying the right amount. It's one thing knowing that the correct amount was £100,000, but saying it is another, and you don't want to be the person who gets it wrong! Thankfully, I was able to say it correctly, but it was still so hard to accept that I had won."

Laura is the latest Tyrone winner of the Downtown/Cool FM 'Cash Call', with Pomeroy's Ciara Deeny scooping a mind-boggling £80,000 just last week. She plans to use the money to carry out work to her garden and driveway, and maybe even book a holiday or two.

Laura has since spent an enjoyable weekend celebrating with family and friends, and said that she was "humbled" by countless messages of congratulations from people far and wide.

"I had so many lovely messages from people that I don't even know congratulating me," She continued. "I had such a nice weekend with family just laughing and celebrating the good fortune.

"We all went out to Omagh to celebrate, and I even had some people coming up to me congratulating me. One of them even said he had been listening to me on the Radio on Friday from his tractor, and that he was in tears of laughter!"