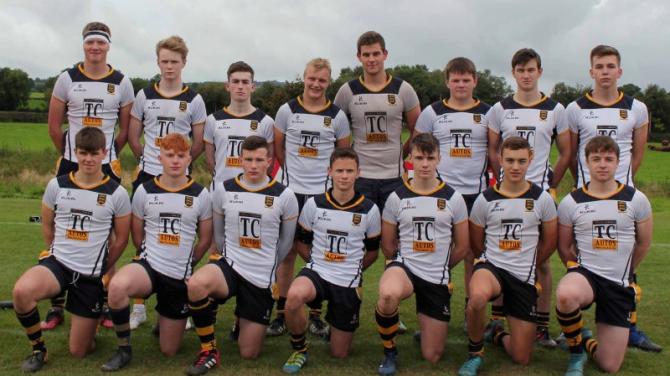 FOLLOWING a positive first run out last week in a pre-season tournament in Foyle, Omagh Academy 1st XV played Down High School in the first full fixture of the 2018/19 season and went down narrowly to a late penalty by 18-15.

Omagh were relatively slow to start, struggling to find any rhythm to their play early on. With a number of unforced errors and a high penalty count against, it was no surprise that Down High took a 3-0 lead with a converted penalty in front of the posts.

Down extended their lead following another Omagh error. Sloppy play from the forwards at the breakdown enabled Down to turn over the ball, moving it quickly to their quick outside backs who rounded the narrow Omagh defence for a converted score.

Finally things started to turn Omagh’s way. The physically bigger Omagh pack used their size and weight to their advantage, forcing the Down defence onto the back foot.

Strong carries from David Braden and Peter McKelvey moved the bell close to the line before fellow front rower Matthew Hunter crashed over close to the posts. However his legitimate try was ruled out as the referee had short sided himself and was unable to see the grounding.

Will Stewart manage to narrow the deficit to seven points when he coolly slotted a penalty following more good forward play from Phillip Rainey and JP Murray.

The home side were in control of possession and pitch position, but continued to make a number of ‘early season’ errors which was preventing a number of scoring opportunities to be converted.

Omagh persisted and were rewarded when a fine set piece play was touched down under the posts.  A solid scrum allowed half-backs Michael Marechaux and Rory Ritchie to release their outside backs.

Nice interplay between Ritchie and Stewart released Harry Stephenson who was tackled agonisingly short, but managed a sublime offload to the on rushing Armstrong who dotted down under the posts. Stewart added the extras to tie the match at 10-10 as the half-time whistle sounded.

The two teams were stuck in somewhat of a stalemate through the opening exchanges of the second half, with neither team making significant inroads in their opponents’ half.

The early season rustiness was evident with both teams making numerous errors. Omagh turned down two makable penalties and on both occasions fluffed the lineout in good attacking positions.

Down managed to capitalise on another Omagh error. A charged down kick was gathered and Down attacked the narrow side where numbers were light in defence resulting in a score in the corner. Omagh responded immediately with a well-worked score.

Jake McCay and Robbie Sproule linked well in open play with Sproule subtly offloading to Rory Ritchie to score. The conversion was missed leaving the score at 15-15 and time rapidly running out.

Down fortuitously earned a penalty in the closing minutes to win a very even game 18-15.

Meanwhile, the Academy 2nd XV also had a very tight encounter with their Downpatrick counterparts. Both teams played out an entertaining 7-7 draw and used this early season game to make full use of their large squads. Through much chopping and changing, Joel Smyth, Scott Wilson and Bailey Irvine all impressed.

Irvine scoring a delightful solo try using his pace and agility to race in for a converted try. Jake Reid added the extras. A pleasing result in what has been a difficult test for the Academy lads in previous years.

The senior teams now look forward to a trip to the North Coast to face Coleraine Grammar School next weekend. Omagh Academy would like to thank Omagh RFC for the use of their facilities.