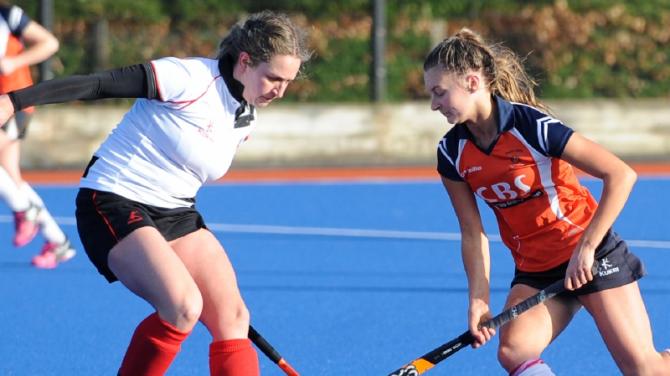 Despite going 1-0 up following a scrappy goal from Amy McCollum, Dalriada went level after the break with a goal scored from a very tight angle. This was following some superb saves from goalkeeper Nadine Hunter who was making her debut in 1st XI colours.

The final whistle sounded just as Omagh were awarded a penalty corner, and Jess Hood made no mistake in scoring the winner as her shot went past the goalkeeper’s left foot much to the relief of the home squad and coaches.

Meanwhile, the 2A XI put in a great performance and were unfortunate not to score following some exciting attacks – leaving the final score 0-0.

Holly Loughlin’s 2B XI squad won 1-0 with Clara Harper scoring the only goal. At Dalriada the U14A XI drew 2-2 with Hollie Berrabah scoring both goals, the U14Bs lost 1-0, U13Bs won 1-0 and the U13A XI opened their school hockey fixture with a stunning 6-1 win, Katie Ritchie scoring four and Sophie Egerton and Ruby Hood with the other goals.

The following Saturday, the seniors travelled away to Banbridge Academy to play in a friendly. Despite missing Jess Hood who was competing for Ulster U18s in the interpros, the squad were sure they could play to their usual high standard. However, a poor start allowed Banbridge to enjoy most of the possession and attacking play and it was them who opened the scoring with a textbook attack down the right channel, cross and finish from the penalty spot.

This was a wake up call for the visitors who began to enjoy more attacks and win some penalty corners. Following half-time, the midfielders, in particular captain Neave Nethery and the instrumental Lauren Armstrong provided good links between defence to attack. Despite some excellent skills from Katie Ballantine and Lucy Brunt, they both saw their shots go wide and over the bar.