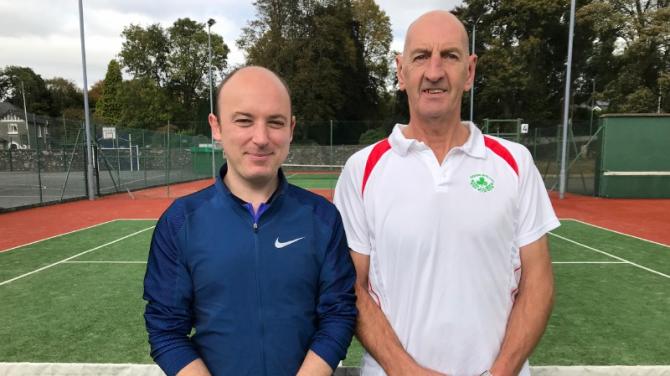 LONG-time and dedicated member of Omagh Lawn Tennis Club, Stephen Cuthbertson, who has won numerous honours over the years at club and county level and well beyond, has just returned from Germany where he was a member of the Irish team who participated in the ITF Seniors World Team Championships.

The affable Stephen, who has also represented Ulster in the inter-provincials, had the privilege of being selected for Ireland having won two double competitions and finishing as runner-up in a singles tournament during the year.

Stephen had initially been on Ireland's over 60 reserve list, but received a late call-up due to an injury to a fellow player.

"I was very excited to be selected," enthused Stephen. "I only received the call late on a Tuesday night and by Thursday I was in Germany!"

"It was very unfortunate for the injured player, who is from Tipperary."

In total Stephen was in Ulm, Germany, for 10 days and although Ireland won only one match, against Croatia, it was still a great experience for the Omagh man.

"There were 50 other countries playing," explained Stephen. "We played against Romania, Great Britain, Switzerland and Croatia.

"It was an absolutely fantastic experience. There was a player from Russia who at one time was the ninth best player in the world, so that was the kind of top standard playing. It was something like the Olympics, the atmosphere was unbelievable. Memories were made forever."

Playing conditions were difficult as well, with Stephen having to play at a high of 28 degrees.

"We aren't used to playing tennis in those conditions in Omagh! But it was lovely."

To help Stephen fund his trip to Germany and celebrate his selection Omagh Lawn Tennis Club held a fundraising competition at the club on Saturday, which was very well attended.

"I would like to thank the committee members, the organisers, the cooks and everyone at the club," Stephen said.

It tops a great year for Stephen who was also called up to the Ireland team to play in the Four Nations tournament in Dublin involving Scotland, England and Wales.

“To represent Ireland twice in the same year was very, very special. It has certainly been a year to remember!”

Stephen’s wife, Mary, is also a keen tennis player and member of the Omagh club having notched up many successes over the years.