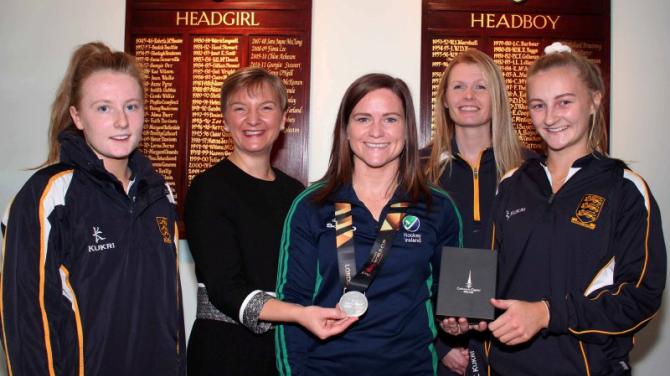 TWELVE years after leaving the school former pupil Shirley McCay was welcomed back to Omagh Academy with open arms and with a World Cup medal around her neck.

Joined by her parents Hazel and Robert, and sister, Lindsay, the Drumquin woman, now 30, led a special school assembly where her history-making achievements in hockey were celebrated.

Shirley, the most-capped Irish sportsperson in history, is still on cloud-nine after she and her international team-mates shocked the world by making it all of the way to the World Cup final in London during the summer.

Ireland started the tournament as the second-lowest ranked team but after an incredible journey in which they stunned the likes of the USA, India and Spain they made it all the way to the final, losing only to professional team Holland.

On Friday last Shirley's career came full-circle when she stepped back into the premises of Omagh Academy where her story all began.

Introduced to the sport by the-then PE teacher Mary Swan, Shirley's fascination with hockey only grew. She was born to be a history-maker, playing a pivotal role as Omagh Academy claimed success in the All Ireland Schools’ Championships for the first time ever.

It was the first of many trophies Shirley would win in her glittering career. Who would have ever believed a World Cup silver medallist would be born in this part of the world?

Shirley, who is now a coach with Ulster Hockey, puts her success in the game down to her former school.

"It's amazing to be back at Omagh Academy where I have some very special memories," she beamed as over 600 pupils and dozens of staff crammed into the school's assembly hall to listen to the local heroine's wise words.

"It was here where I was introduced to hockey; it was my love and everything else came after that. My PE teacher was Mary Swan - and she played a massive part in my life: it was Mrs Swan who introduced me to hockey. If it wasn't for Mrs Swan I wouldn't be standing here talking to you in assembly now. To this day she is incredibly supportive to me."

Shirley added: "We were very lucky to have a good team at school - we won the Junior Schools' Cup and went onto win the Senior Cup and the All Ireland for the first time in the school's history. When I look back on my life and career so far they are some of my fondest memories."

Shirley's career grew at the school. She was asked to represent Ulster and Ireland at U16 and U18 level, making wonderful memories along the way.

Aged 18, she was invited to a trial to play for Ireland seniors. " I travelled to Dublin on my own from Dublin and stayed in a B&B. I remember thinking I definitely wasn't good enough; everyone was better than me; they all had expensive sticks but I was lucky and worked hard to get selected for Ireland."

Twelve years on and Shirley has 273 caps to her name. She has travelled all over the world and experienced plenty of highs and lows along the way. Undoubtedly, her greatest high was the unbelievable joy of reaching the final with Ireland.

"We had a really amazing experience in London during the summer and what was most special was the large number of people who have no interest in hockey but jumped on board and got sucked into the dream we were trying to achieve.

Passing on life advice to the curious pupils of Omagh Academy, Shirley added: "I hope that my experience, a girl from Drumquin who made a World Cup final, will prove to you that anything in life is possible.

"All of those years ago when I was a year eight, I never imagined that I would be sitting here today telling you about my experience. If you work hard enough, trust in your preparation, smile and enjoy it then you never know what you can achieve."

Omagh Academy principal Ruth Baxter and the hockey coach, Lesley Dickson had earlier paid tribute to Shirley and the school captain and vice-captain Neave Nethery and Jessica Hood respectively, presented her with a gift.

On Thursday night Fermanagh and Omagh District Council held a reception for Shirley, hosted by the chairman, Howard Thornton.