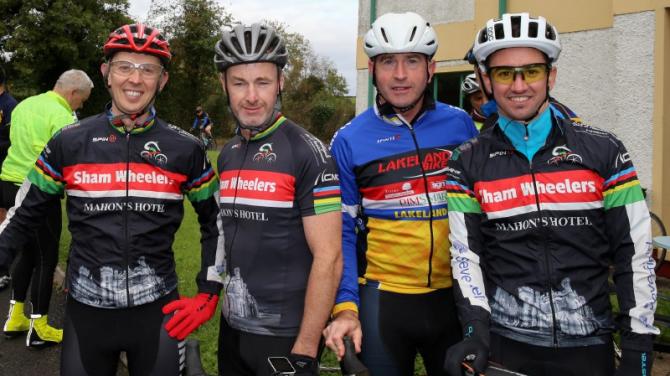 THE annual charity Sportive Cycle Run organised by the Trillick Cycling Club took place recently and it proved to be a great success.

A spokesperson said: “More than ninety cyclists from many parts of Tyrone, Fermanagh, Monaghan and even Derry came along to support this event.”

For the cyclists there was the choice of either a thirty mile route or a sixty mile run, both routes around the local villages, leaving the Leisure Centre where there were refreshments laid on.

The spokesperson added: “A special well done to Mary Slevin and her wee crew from Dromore who helped Mary complete her first 60-miler, Kevin has a 70 miler for her next  A huge thank you to all the cyclists who took part, we appreciate your support. The organisers would also like to extend their thanks to all who helped out on the day in any way. Thanks to Ivan and George for acting as road marshals, to all the club members who helped out in any way and to Trillick Leisure Centre for your support. Thanks also to the staff and committee from Peter Pan Playgroup for all your help.

“Finally, they would like to offer their appreciation to Neil and Una Brennan for sponsoring the delicious soup, and to Malachy and Bernie in NISA for your endless support in any event they organise. Last but not least we must acknowledge the hard work and commitment of Ciaran, Barry and Ferghal. This annual event would not happen without the dedication from these three members. Well done boys on another successful cycle. Thanks again everyone and we will hopefully see you all again next year.”