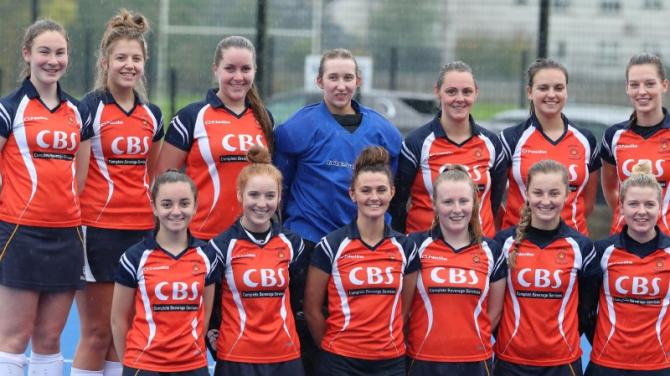 Omagh Hockey Club ladies first team hosted Raphoe ladies firsts in an Ulster Senior One League affair on Saturday played in rain-lashed conditions, with the teams sharing the spoils in a 2-2 draw.

Omagh started strongly and held onto the ball well throughout the first couple of minutes. There were some great passes from Lauren Armstrong, Dani Darragh and Holly Swann up to the forwards, but Raphoe’s goalkeeper was quick off her line and put an end to the Omagh’s forwards attempts on goal.

Meanwhile, at the other end Raphoe were quick on the attack with Omagh’s goalkeeper having to come out and attack off her line with a diving save.

Omagh then settled their heads and got stuck back into the game. Dani Darragh found herself in the Raphoe’s circle and slotted the ball past the Raphoe goalkeeper to open the scoring.

Omagh started the second half strong again working their way through a frustrated Raphoe side. There was some great play from Emma Fulton whose ball travelled from the back line-up to the forward area, where Aimee Buchanan received, and she saw Dani Darragh sprint up the pitch beside her. A great pass left Dani again in the circle and with little trouble she slotted the ball into the back of the Raphoe net.

Raphoe were lucky to win a penalty corner and with defender, Lyndsey McCay, sprinting out to the attacker she was unlucky with the deflection, as the ball went into the Omagh net.

However, a Raphoe player, who slipped a pass into the Omagh circle, took a shot on goal and past the Omagh keeper. That left the score 2-2 at the full-time whistle.

Omagh firsts would like to thank the supporters who came out to watch them on Saturday, despite the miserable weather conditions.