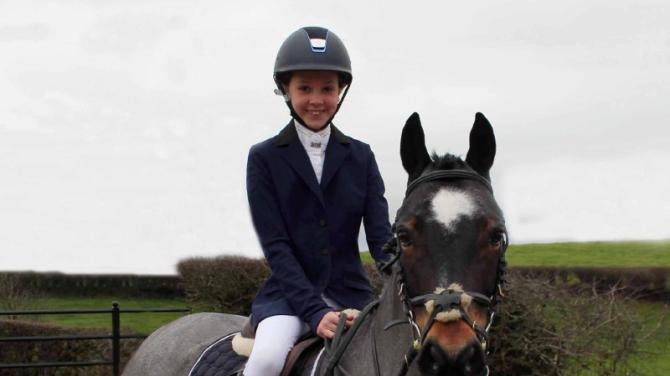 CHRISTMAS has come early for a talented Fintona schoolgirl who has qualified for the most prestigious equestrian event in the UK - the Olympia London International Horse Show.

Ten-year-old Zara-Jane Kelly will travel with her entire family on Monday morning for the televised programme to compete in the Pony Club Mini-Major class where she will be paired with one of the top show-jumping riders in the world.

The St Lawrence's Primary School pupil - who is also a member of Fintona-based RD Equestrian - is the only qualifier from Northern Ireland after she won the under 12 national heat in the Meadows Equestrian Centre in Lurgan.

Beaming with pride, her mother Tracy said: "It's a massive achievement for someone of Zara-Jane's age. She's still only 10 and the qualifiers were for children up to 12 years old.

"Zara-Jane is the only qualifier from the whole of Ireland, so we are very, very proud of her - that's putting it mildly. We are so excited to be travelling to London.

"It's a huge stage for such a small child and a small pony. Zara-Jane says that even if Santa never comes this will have done it for her."

The whole family will be joining Zara-Jane in London, including her parents Tracy and Martin; brother Eunan, sisters Amy and Caitlyn and her grandparents, Eddie and Kay McGirr. Her coach, Roisin Blaney, of RD Equestrian, is also attending.

Zara-Jane will travel with her siblings and mother on Monday morning, while her father Martin will leave on Sunday night with her beloved pony, making the long trek from Fintona to Dublin, onto Holyhead before driving to London.

A natural talent, Zara-Jane has been riding since she was only six years old. She qualified with her nine-year-old Roan mare 'Robin', who she has had for three years.

"Zara-Jane has other ponies, but it is very fitting that it is this pony which she has qualified with for the Olympia," her mother added. "They have learnt the ropes together.

"Under the guidance of her trainer Roisin, they have gone from starting out jumping at 60cm classes at local shows, right the way through to the National Premier U10s and jumping on the Irish U10s Pony Team in Scotland, where they brought home a gold medal for Ireland.

"Selection caps a pretty spectacular year for her. Not only is it a huge achievement for Zara-Jane, but also for RD Equestrian. It's a small pony club in comparison to other clubs, even here in Northern Ireland. So it's a terrific honour for RD Equestrian to have one of their members representing the club."

Zara-Jane is most looking forward to seeing which of the top international riders she will be paired with in the Pony Club Mini-Major class, which is a popular relay-race. The thrilling competition involves the mini and major riders teaming up to each complete a showjumping round against the clock.

"We are just ecstatic to be going. I'm quite nervous at this point, but Zara-Jane is really excited. She just can't wait to see who she is paired with," said Tracy.

"Zara-Jane won't know which international she is going to be paired with until she arrives on Monday. She had hoped to be paired with Cian O'Connor but unfortunately he is not competing there this year, so she would like Jessica Springsteen.

"We are just hoping Zara-Jane and pony can hold it altogether. But she is very laid back by nature, she is taking it all in her stride and looking forward to the opportunity.

"I just want her to enjoy the experience, without any pressure and lap up the occasion. For her to have qualified and to have got there is just such a massive achievement, so anything else is just a bonus."

Olympia London International Horse Show is one of the UK's biggest equestrian competitions. Many of the top show-jumping riders in the world compete annually as well as Britain's finest, namely Ellen Whitaker, Tim Stockdale, Ben Maher and many more.

Held in the Olympia exhibition centre, London, Olympia celebrated its 100th anniversary in 2007.

The five-day programme will be televised live on BBC2 and the red button.