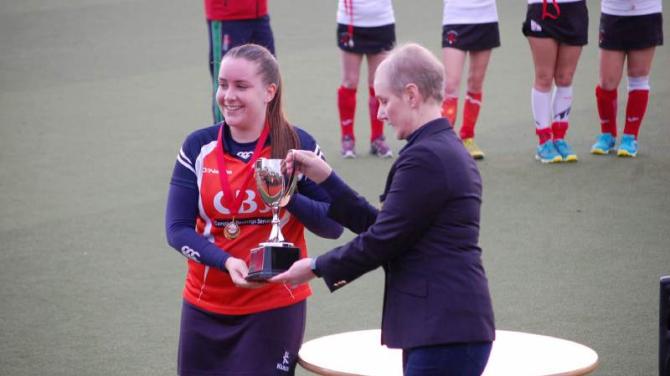 Aimee Buchanan and Emma Shortt netted second-half goals as the dogged Omagh fought their way past their stubborn rivals to secure their first ever Senior One League Cup trophy at Stormont on Saturday.

Victory and the trophy was the perfect way to sign off a landmark 2018 - the year the club celebrated its 80th anniversary. For captain Lyndsey McCay, she was inspired by her sister Shirley's World Cup heroics in which the Ireland team stunned the world by making it all the way to the final in London back in the summer.

And to top a fantastic sporting year in the McCay household, Shirley also helped her Pegasus team win the Denman Ulster Shield with a penalty shoot-out victory over Belfast Harlequins in a dramatic Boxing Day showpiece final.

It came days after Shirley and her Ireland team mates picked up the team of the year accolade at the RTE Sports awards night in Dublin.

Speaking about Saturday's success, Omagh skipper Lyndsey beamed: "We are absolutely thrilled. It was a tough game in the first-half but we managed to get ourselves ahead after the restart. We had a good spell of pressure when we came out in the second-half, we seemed a little bit more determined and the two goals came as a result of that.

"It was a water-based pitch which neither side is used to, so it took us a while to get into it but I think we deserved to come out on top with the number of chances we had.

"Raphoe play a bit differently than us, using four in midfield, so it was all about finding the spaces and the gaps. It took a little bit of manoeuvring to get around that and we had a bit more belief and fight in us."

In recent years Omagh have come out second best in cup finals and Lyndsey was pleased to have finally come out victorious. She continued: "Winning the cup has been a long time coming! It was great to come out as the winners for a change and to be able to celebrate the success.

"It's my first trophy with Omagh and for a lot of the girls. And hopefully it's the first of many! The league is the next priority, we are currently top but it's very early days. We have some difficult games coming into the New Year so hopefully we can come through those.

"Winning this cup is a great confidence boost and we go into the New Year in good spirit. 2018 has been a fairly good year and this trophy is a late Christmas present!"

Shirley, who was unable to attend the match, was delighted Omagh was able to capture the trophy.

“They have done brilliantly, and I am very proud of them. They have made finals in the past and always came out second-best, so it’s great for them to travel to Belfast and come home with the cup. It has been a great 2018 all round!”

Reflecting on her own cup success, Shirley was relieved to have got her hands on the Ulster Shield for the second time in her career, after lifting the trophy back in 2006 with Randlestown.

Pegasus took a 2-0 lead but Omagh’s Gemma Frazer and her Belfast Harlequins team mates fought back to take the game to a penalty shoot-out, with Shirley’s team prevailing.

“It was great to lift the trophy, it's the club's first time to win the cup since 2011 so we are all delighted,” Shirley continued.

“We missed a good few chances and we should have put the game to bed early, but they did really well to fight back and thankfully we managed to prevail in the penalties.

“We would have been really disappointed if we had let a two-goal lead slip and gone on to lose the game, so we are relieved to have won.

"It is a really prestigious shield and it's one of the oldest in hockey history, and maybe even the world so we are really delighted."

Full match report and photographs in this week's Tyrone Constitution.