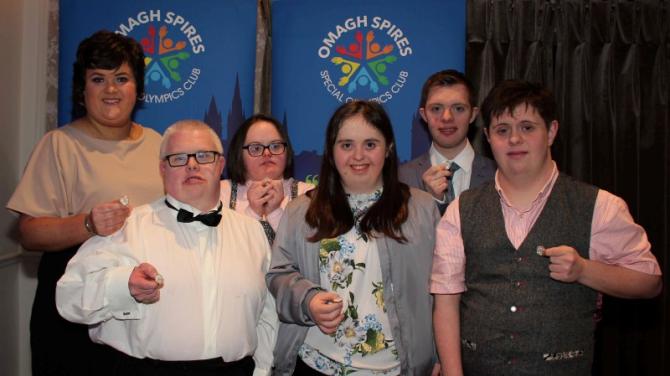 The large contingent of 120 people reflects the growing popularity of the club and the three sports it competes in – bocce, swimming and equestrian. The event was compered by Georgina Nethery.

Rosemary McAleer, chairperson, told the gathering: “Over dinner I was speaking to a family, whose daughter affected by Autistic Spectrum Disorder, shared how the experience of horse riding has fulfilled her ambition and has given her growing confidence.

“This is the major benefit of Special Olympics for the athletes – self-confidence and self-esteem. In these times of growing uncertainty and government cutbacks an organisation like Omagh Spires provides support for individuals and families affected by learning disabilities.”

Rosemary paid tribute to swimming coach, Andrew Goodwin, who was awarded Fermanagh and Omagh Disability Coach of the Year in February 2018.

The highlight of the year was the Ireland Special Olympics Games where Carla Priestly, Edel Kelly, Robbie Bell, Jarlath Mullan, Andrew Bonner, Kevin Hagan, Gavin Forsyth and Lee Mitchel did the club proud. They brought home an amazing five gold, seven silver and one bronze, medals. Best wishes were extended to Lee Mitchel who has been selected to represent Ireland in the World Special Olympic Games this year.

Rosemary also thanked both coaches and volunteers for the amazing work that they undertake creating the unique spirit that is Omagh Spires.

The awards ceremony was introduced by athlete, John Paul McCusker, who has been with the club for 10 years. After an exciting and enthusiastic prizegiving ceremony everyone went home happy with the athletes anticipating another successful year.