Podium finishes for Omagh Harriers in Athlone and Donegal 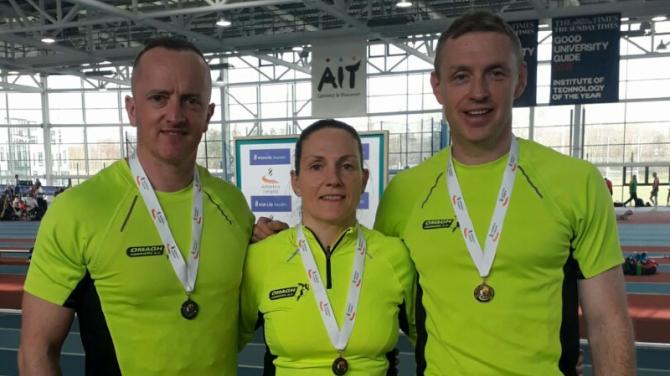 THREE Omagh Harriers travelled to Athlone for the National Indoor Championships on Saturday to battle with an impressive field for the Masters titles.

Kicking things off, Mark McConnell ran a personal best of 10.3 for the 60 metre hurdles, taking gold. Still a relative novice to track events Orlagh Colton grabbed a personal best with a time of 11.29 to beat former Irish Champ Isabella Breslin from Donegal in the 60 metres hurdles. She also claimed a bronze with a jump of 3.53m in Long Jump for bronze.

Trevor McGlynn was battling a tight hamstring but still managed a silver in the high jump and silver in the hurdles with a time of 9.49 seconds. A great effort considering it was a battle to make the meet.

Meanwhile, Ella Quinn was awarded first Female Junior athlete at the Cara 5k in Bundoran on Friday night. This was an excellent performance from the young Harrier who has been in fine form over the past few weeks. Sean Diamond was second Male Junior to cross the line in what was a very competitive race. Well done to all other Omagh Harriers who also raced over the 5K.

Also racing well over the weekend was Ciara Largey who took part in the Glenariff Mountain Race which was the first round of the Northern Ireland Mountain Running Association (NIMRA) Championships which were held in Glenariff, Co. Antrim over 5.9 miles with  a climb of 370 metres. Ciara held her position well to finish in the top five and now looks forward to the second round which will be held in the Mourne Mountains at the end of March.