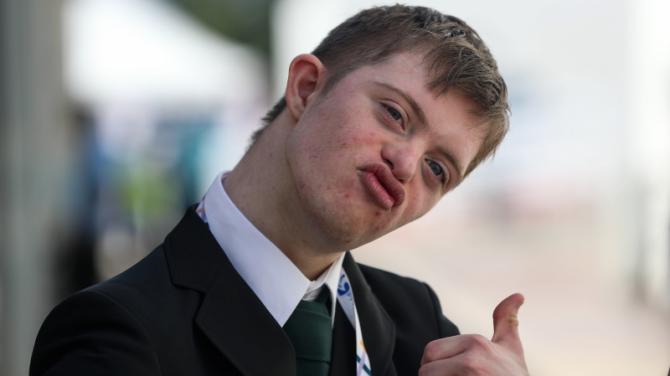 IN an amazing international debut in which he clinched two gold medals at the Special Olympics World Summer Games, Omagh's Lee Mitchell is preparing to come home to a hero's welcome after a 'trip of a lifetime' in Abu Dhabi.

Representing Ireland, 21-year-old Lee, who is a member of Omagh Spires Special Olympics Club, won gold in the English Equitation and the Working Trails events in the United Arab Emirates.

Accompanied by his mother, Laura, father, David, brother, Sam, sister Amy and her boyfriend, Lee, the talented Omagh rider battled jet-lag, humid temperatures and the challenge of working with different horses to excel in the various competitions.

Lee, who is a STEPS student at South West College, and his family will arrive in Dublin airport on Friday afternoon, when they will be able to reflect on a trip that has been 'a huge marker' in Lee's life, his proud mother, Laura, said.

"It has been a trip of a lifetime, it really has," she told the Tyrone Constitution yesterday (Tuesday), while still in Abu Dhabi.

"We are just over the moon. It was a big challenge for Lee to do the World Games. He has been out of his comfort zone and normal routine. Travelling with his team mates, Lee's days have been starting at 5am and 6am and he doesn't get back until after 10pm.

"These have been long days for Lee, and it has been a big challenge for all of the Ireland equestrian team. They have all done magnificently well, however, and they're all coming back with medals.

"The head coach for Ireland's equestrian team, Etta Hayes, has been amazing. She is very proud of them."

Lee's participation in the Games concluded on Monday, meaning he and his family could enjoy the last few days of the trip.

"With jet-lag and the timezone difference, the first couple of days were really tough for Lee," she said. "He has medical issues, he has type-one diabetes and is on insulin, so the trip has presented challenges, but he coped remarkably well.

"We, as a family, have found it very tough as well. We have had to hand over what we would normally do day-in, day-out. We monitor him very closely and manage his insulin, but out here we've handed over the responsibility and I found that very tough as a mother.

"But we've got through it and Lee settled in remarkably well. He had been a bit anxious in the first couple of days and though he couldn’t express it, it came through in his behaviour. However, he built up trust in his coaches.

"It has been a huge, huge learning curve – a great experience that has really helped to build his self-esteem."

Despite his remarkable achievements, Laura feels her son hasn't been able to compete at the top of his game.

"If I'm honest, I don't think Lee performed as well as he would normally, but all of the athletes are at the same disadvantage in equestrian – they're all using horses they haven't rode before," said Laura.

"Even the coach found the horses difficult to work with as they are different breeds and have different temperaments from the ones we are used to in Ireland. We've had very scary days and one girl was thrown off and has serious injuries. So we are definitely relieved Lee has finished competing. There is a risk when you're on a horse and we found it quite difficult at the start. But now we can now relax and enjoy the rest of our trip!"

The Special Olympics World Games 2019 has witnessed more than 7,500 athletes from over 190 nations compete in nine venues across Dubai and Abu Dhabi in what is the largest sports and humanitarian event of the year.