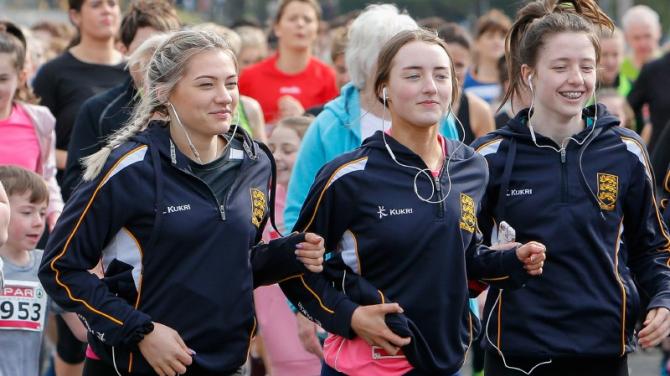 THERE can be little doubt that this year’s SPAR Omagh Half Marathon was the biggest and best to date.

It was a beautiful crisp morning with the buzz of almost 4,000 people arriving ready to give their all.

Every ability of runner was arriving raring to go, from large groups of club runners getting group pictures runners attempting to run a half marathon for the first time nervous at what the next couple of hours would hold.

Near perfect running conditions made for excellent times in both the Half Marathon and the 5K race.

Half Marathon male honours went to Clonliffe Harrier, Gary O’Hanlon, with a time of 1:07:40.

Mark McKinstry, North Belfast Harriers, was second, in a time of 1:08:40, and Eoin Hughes, Acorns AC, closed out the top three in 1:10:46. Omagh Harrier and twice previous winner Stephen Duncan came in fifth in a great time of 1:12:52.

The 5K race saw special guest for the weekend Catherina McKiernan line up along with the rest of the field. Omagh man and Carmen Runners member, Martin Cox, was first across the line for the second year running with a superb time of 15:49. Tristen Kelly, also of Carmen Runners, was second in 17:25 and Omagh Harrier, Oisin McGuigan, was third with 17:42. Catherina McKiernan lived up to her reputation and took the ladies prize in 17:53. Sorcha Mullin, Omagh Harriers, came second and seventh overall in 19:07 and Paula Donnelly was close behind in 19.23.

“The growth of the event in recent years has seen the standard rise along with the numbers and the event sold out in record time,” said an organiser.

“The challenges of the event growing means we rely on our sponsors more than ever. We thank our title Sponsor Spar NI for their continued support and along with our other sponsors and in particular: Omagh Credit Union, JMG Systems, Bradley Pharmacy Group, Pizzarama, HSS Hire, Whites Oats, Calor Gas, McNulty Solicitors, Silver Birch Hotel, Caldwell Cycles and TC Autos

“Our sponsors continued support means we can assist charities working for everyone in the Omagh and surrounding area. The charities benefiting this year are Omagh Riding for the Disabled and Omagh Food Bank.

“With the growth of the event the support from the PSNI and Order of Malta are critical to the safety of the runners and for that we are grateful.

“We must also thank the small army of marshals and helpers that gave up their time and worked tirelessly to make the 30th Spar Omagh Half Marathon an amazing experience for everyone running.

“Finally, thank you to all the runners who made this the best event it could be. See you all in 2020!