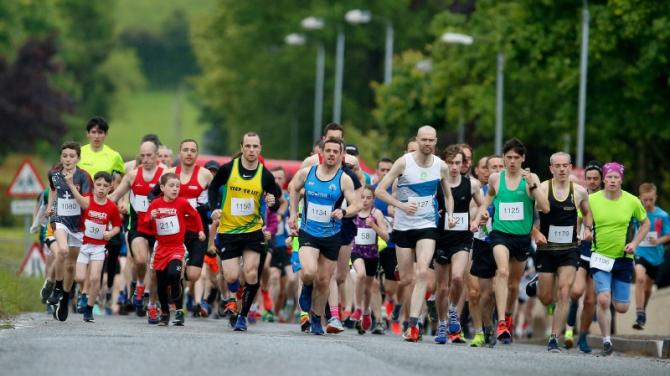 A QUALITY field assembled for the second race in the Paul Murray 5k Grand Prix Series on Friday evening in Eskra.

The wet weather earlier in the evening did not put off almost 300 eager runners and walkers and the rain cleared just in time for the start of the race with cool conditions for the athletes. The participants faced the challenge of a testing 5k route which was run in the opposite direction to Race 1.

The crowd were treated to a thrilling race with fourteen runners going under 18 minutes. Young Omagh Harrier Matthew Neill excelled and pulled clear of the field to take victory in a superb time of 15.44. Next across the finish line was Eoin Mullan (Omagh Harriers) in a time of 16.04 and closely followed in third place by Jack Moore (Carmen Runners) in a time of 16.12.

Once again the first female over the line in a competitive race was Aisling Murray (Carmen Runners) in the excellent time of 18.43, next in second place was the young local upcoming athlete Eimear McCarroll in a time of 18.54 and completing the podium in third place was local runner Grainne O’Hagan (Knockmany Running Club) with a time of 19.03.

Oisin McGuigan (Omagh Harriers) continues to impress winning the Under 18 category in a very fast time of 16.31 with Danielle Harkness taking the Under 18 female category. Winners of Under 12 categories were Matthew McKenna (Knockmany Running Club) and Cora Scullion.

With two races still to go it’s all to play for in the overall Paul Murray 5k Grand Prix Series. Having completed two races in the men’s series the trio of Vincent McAlister (Acorns AC), Brian Taggart (Sperrin harriers) and Adrian Scullion (Knockmany Running Club) are the leading contenders.

In the Female Grand Prix in pole position are Aisling Murray (Carmen Runners), Grainne O’Hagan (Knockmany Running Club) and Eimear McCarroll who all occupied the podium positions in the two races so far. Runners need to complete three out of four races to qualify for Grand Prix standing. Participants are reminded that the unique Paul Murray Grand Prix Series Medal will be presented to all who complete the Grand Prix Series.

The organisers Knockmany Running Club were once again overwhelmed with the large turnout and thank everyone for supporting and all who helped contribute to a successful night.

Organisers remind everyone is very welcome to the next two races at 7.30pm on Friday, June 21, and June 28 on different 5k routes. All proceeds from the Paul Murray 5K Grand Prix Series are going to the Air Ambulance Northern Ireland charity.

Registration is from 6pm to 7.15pm in Eskra Community Centre. Entry fee for individual race is £7 with refreshments served afterwards.