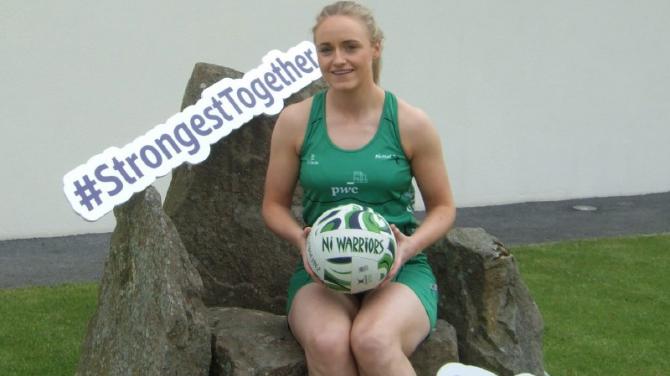 CLANABOGAN woman Neamh Woods will fulfil a long-held dream this Friday when she makes her first appearance at a Netball World Cup as Northern Ireland face champions Australia in their first group game in Liverpool (Sky Sports, 11am).

The Tyrone ladies gaelic captain has amazing memories from wearing the green dress at last year's Gold Coast Commonwealth Games in Australia, even the 94-26 beating by the hosts on the opening night.

"Netball is a fully professional sport in Australia, they've won the last three World Cups and the Diamonds have a huge following.  The match was live on prime-time television and the capacity crowd in the arena generated some atmosphere," she recalls.

"It just so happens that our first fixture is against them this time too so we've the toughest possible start but it's a privilege playing against the best team in the world so we'll look to enjoy the experience."

Northern Ireland may be proverbial lambs to the slaughter against Australia but have high hopes of finishing in the top half of the 16-team tournament which will be televised by Sky Sports and the BBC.

The giant-killing girls in green have repeatedly punched above their weight at international level over recent years, rising to an all-time best of eighth in the world rankings, earning their 'Warriors' nickname.

After facing Australia, the Warriors will be expected to win their remaining Pool A matches against lower-ranked Sri Lanka (Sat, 9.25am) and Zimbabwe (Sun, 3.25pm) to book their place in the second phase of the tournament.

Their probable opponents at this stage are New Zealand, Malawi and Barbados with one more victory likely to get Northern Ireland into the fifth to eighth place play-offs pot.

Playing eight games in 10 days is incredibly demanding for an amateur team and Northern Ireland suffer from a lack of fixtures at international level but it was a similar schedule at Gold Coast where they came an excellent eighth.

That 2018 Commonwealth Games was a huge highlight in 30-year-old St Ciaran's Ballygawley PE teacher Neamh's illustrious sporting career, which has seen her lift a trophy in Croke Park and win two ladies gaelic All Star awards.

"Gold Coast was simply surreal, a phenomenal experience, competing against the top players in the world in our own sport and rubbing shoulders with real superstars from other codes," she reflects.

"It was the experience of a lifetime and what made the trip such a success was how we performed on court and managed to translate all our hard work into results which saw us finish eighth, above both Scotland and Wales.

"I suppose performances over recent years have created expectations around us now but this is an ambitious team and we can't wait to test ourselves again on the big stage.

"Netball has unprecedented profile now, especially after England winning gold at the Commonwealth Games, and as the women's soccer World Cup has shown, there has never been more interest in female sport so it's an exciting time."

Best known in these parts as Tyrone's leading ladies gaelic footballer and county captain, Neamh is looking forward to netball reaching new audiences during this tournament, not least locally.

"Netball is a fantastic sport at the elite level and I always say a match takes more out of me than (gaelic) football because it's so fast and just relentless throughout each 15-minute period, with a lot of physicality.

"In gaelic I'm probably looked on as quite a big, strong, physical player but in netball I'm often the smallest on the court.  It's technically a non-contact sport but because of the speed and congested space you can get hit hard."

"It's incredibly busy at times and takes a lot of organisation and some sacrifices but I absolutely love everything I do and am fortunate enough to have tasted the sort of success along the way which makes the effort feel worthwhile.

"Tyrone football and Northern Ireland netball have both been important parts of my life for so many years and each can be a breath of fresh air, with varied environments, different circles of friends and so forth."

"We're rivals on the football field when Tyrone play Armagh but we're more often on the same side, playing netball for Northern Ireland, at club level for (NI Premier League champions) Larkfield or even the annual gaelic interpos for Ulster."

The presence of O'Hanlon at centre and vice-captain Fionnuala Toner, a London Pulse SuperLeague player, at wing defence means Woods often finds herself on the bench for Northern Ireland.

That's very different to what she's used to with Tyrone, as long-serving skipper and undisputed star player since Gemma Begley's retirement, but Woods knows her worth within the set-up and aims to make every chance count.

"There's fantastic competition for places within the squad of 12, and that depth is key to the success we've had.  Everyone has compete confidence in each other and we know whatever seven are on court at any time can do a great job.

"With such an intense schedule of matches at the World Cup, everyone will have plenty of opportunity to make their mark and contribute to what will hopefully prove another very successful competition for us," she says.