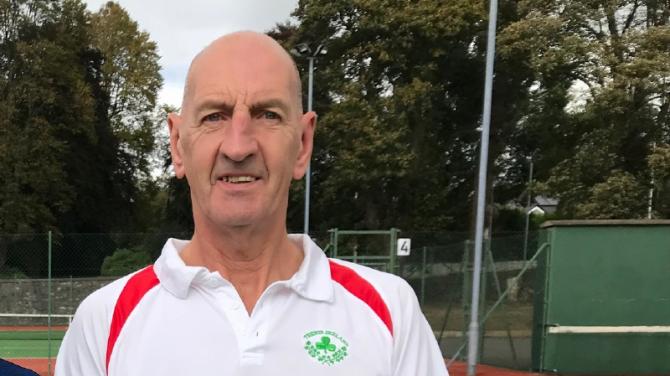 LONG-time and dedicated member of Omagh Lawn Tennis Club, Stephen Cuthbertson, added to his collection of silverware earlier this month with victory in Limerick.

The affable Stephen was crowned winner of an over-65 event in an Irish Open qualifying event, winning three rounds in convincing manner.

Stephen, whose wife, Mary, is also a keen tennis player and member of the Omagh club, defeated a competitor from Newcastle, Co Down, 6-2 6-3 in the first round before knocking out a Limerick-based player on a 6-1 6-1 scoreline to seal his place in the final.

“Sometimes the score doesn’t reflect the game,” said the modest Stephen, who felt he was quite fortunate to win in such convincing manner.

In the final, Stephen was on top form to beat his Ireland team mate, David Murphy, from Dublin, 6-1 6-2.

“It was one of those days. Put it like this, in football if you had 10 shots on goal every one of them went in!,” laughed Stephen.

“Almost everything I hit was a winner. I struck a purple patch - it’s not often you get those days.

“It was fantastic. I didn’t expect to win it like that.”

Stephen hopes the victory sets him on his way to representing Ireland once more - and he has given himself the best possible chance.

The Omagh man has already been on tour with Ireland this year, having participated in Croatia’s ITF Seniors World Team Championships.

Stephen helped Ireland to victories over India and Turkey to seal a place in the latter stages, eventually finishing a very respectable 11th out of 23 teams.

It was the second consecutive year Stephen took part in the prestigious competition, having travelled to Germany in 2018.