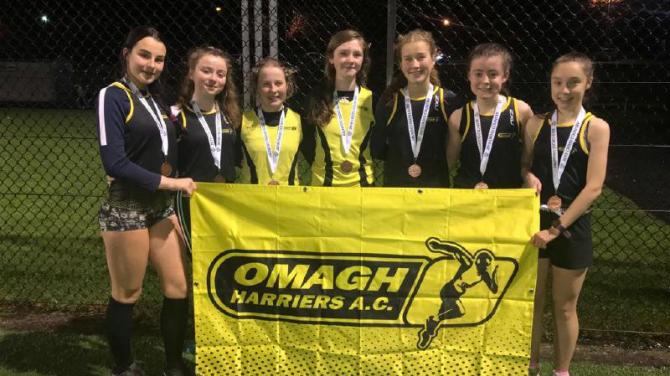 OMAGH Harriers would like to thank all their junior athletes who performed to such a high level at the uneven ages Ulster cross country championships on Saturday.

Conditions at the Bobby Rea course were extreme with mud, rain and a bitterly cold wind but the club’s young athletes were not deterred.

In the under 13 girls competition the Omagh squad ran bravely in some of the worst of the conditions of the day.

The club also had several juniors running for the first time with Padraid Og McDermott putting in a brilliant display in the under 15 boys race finishing well up the field.

Not to be outdone his sister Caitlin Mcdermott then ran strongly to gain team bronze with the under 17 girls.

The under 15 girls were again very impressive as Lauren Molloy and Ellie Robinson were joined by Cora McNamee over the very difficult 3kms course.

The under 17 girls team Sorcha Mullan, Sarah Broderick, Ellie-Jane Quinn, Alana Casey and Caitlin Mcdermott then fought through 4kms of mud to claim very well deserved Ulster team bronze medals and with that qualification to the All Irelands.

Ella Quinn then added to the impressive haul of medals as she claimed individual bronze in the under 19 girls competition.

Ella and the under 17 girls will now compete in the uneven ages All Ireland cross country championship finals in County Meath on December 15. Omagh Harriers would like to thank all the club’s coaches especially junior ladies coach Bill McCausland.