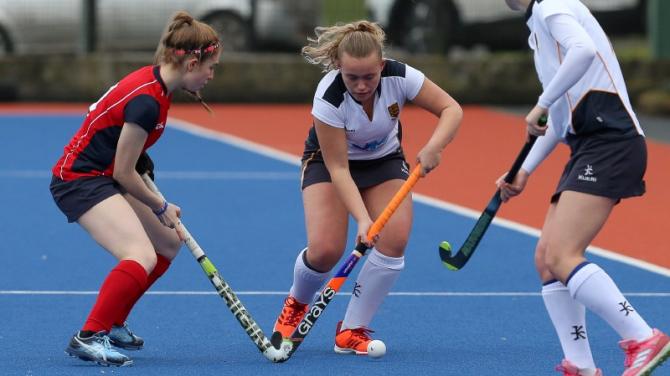 THERE was further delight for Omagh Academy’s senior hockey team in the latest round of Schools’ Cup with the firsts now through to the last four of the competition.

Fresh from their victory over much fancied Rainey in the previous round, the Academy girls played host to Ballymena Academy at Campsie on Friday afternoon in a keenly contested quarter-final game.

It was another thrilling game with the Omagh girls making home advantage pay and ultimately emerging victorious to seal semi-final spot.

Ballymena went two goals down with scores from captain Lauren Armstrong, who scored from a corner right on half-time and another from Sophie Egerton, who finished off a great move just after the half-time interval, securing the win for Lesley Dickson’s young charges.

However it was a tense finale, as a fantastic goal from Ballymena Academy’s Emmie Booth towards the end of the third quarter to make it 2-1 set-up a grandstand finish.

The Academy girls held firm and ran out the deserved winners. They will now be busy making preparations for their semi-final, a first for the school in over a decade.

“Thanks to Ballymena for a great contest! Thanks also to the excellent supporters! #12thman. Semi-finals here we come!”