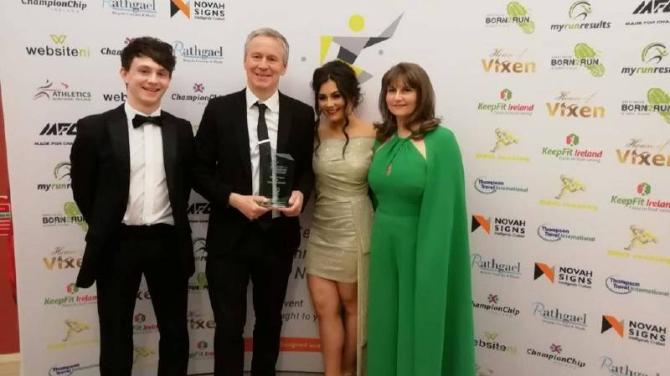 THERE was cause for celebration for a number of local athletes and clubs at the inaugural Spirit of Running Awards NI at the Armagh City Hotel on Saturday night.

The event was held to recognise the most inspirational figures within the sport from right across Northern Ireland and it was no surprise that athletes from the locality featured predominantly.

And they don't come much more inspiring than Killyclogher man, Peter Dolan, who has helped to set up a host of running programmes in memory of his son, Enda, who was killed by a drunk driver in 2014.

Peter was honoured with the 'outstanding voluntary contribution to running’ award.

“It was a bitter-sweet moment,” admitted Peter.

“But it was very nice to be recognised and I’m very honoured to have received the award on Saturday night.

“I’m lucky enough to have good family, friends and team around me to help promote and push on with ‘Run For Enda’. Without those people, it wouldn’t be possible, so I would like to take the opportunity to thank everyone involved with Run for Enda over this past number of years.”

Conor McCarroll, head coach of Knockmany Running Club - who was honoured with a BEM in the Queen’s New Years Honours list for services to running and charity - was named as the ‘most inspirational male running coach' winner.

Conor has overseen the growth of Knockmany Running Club from half-a-dozen beginners in 2009 to a huge club of over 150 members today, helping to raise thousands of pounds for charity in the process.

Ultra-runner Jill McCann, from Omagh, was awarded the ‘most inspirational female runner’.

Jill was not only the first woman in Ireland to complete the ‘Belfast to Dublin and Back to Belfast' 214-mile ultra-marathon, but also won the gruelling event last year.

The Harriers’ Omagh Half Marathon was recognised as the best event of the 13.1 mile distance, while Carmen Runners’ One-mile Relay was awarded ‘best original running event’.