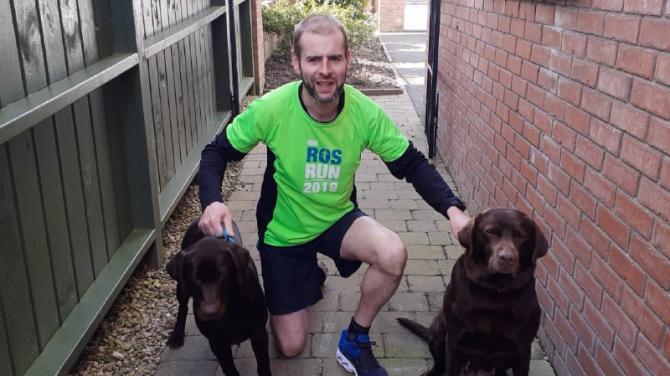 IT'S amazing the lengths some enthusiastic runners will go to in order to maintain their fitness during this ongoing 'lockdown'.

Omagh man Richard Shannon is an ultra-runner and is used to training hundreds of miles every month to meet his goals - and even the coronavirus outbreak won't stop him in his aim to chalk up as many miles as he possibly can.

While many of us were using last weekend to catch up on our favourite Netflix series, reading books and scrolling aimlessly through our social media feeds, Richard took it upon himself to run a marathon.

Richard has ran a number of unusual races in the past, including a daunting 100-mile event that most of us could only ever dream of tackling, but Sunday's run will forever stand out in his mind.

Because, on Sunday, Richard ran 873 laps around his house in over five hours for a total of 26.2 miles!

“It’s certainly something different and it gives people a bit of a laugh, but at the same time there’s a serious message behind it,” said Richard.

“I read the wrong kind of running websites!” Richard laughed.

“Guys have been doing crazy challenges around the world; one man in France ran a marathon on a seven-metre balcony!

“I had been toying with the idea and on Sunday I took the plunge.”

Richard needed the help of his two Labradors - Poppy and Coco - to help him along the way.

“It was difficult to get any momentum - I took a few strides and then you’re turning the corner.”

To ‘mix it up’ a little, Richard changed direction every three miles.

“It was a good mental challenge. It was a spare of the moment thing.

“I was supposed to do a marathon in Roscommon on Saturday, but obviously it was cancelled, so this was the substitute.”

Richard has completed over 50 marathons in the past, but this was a challenge like no other.

But the real motive behind the challenge is to keep people at home during this unprecedented time.

“You don’t have to run around your house like me, but I’m being told the parks are still busy, and it’s important we stay much closer to home - and not to run in groups.”

It was a bright and early start for Richard; he began his race at 5.50am and finished at 11.40am.

“It’s important to keep your immune strong - but stay within your own limits of exercise.”