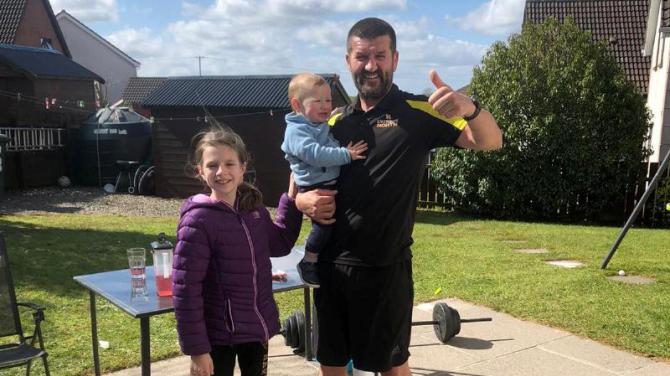 WHEN Mark Orr realised the worrying extent of the need for a foodbank in the town during the ongoing pandemic, the Omagh man knew he wanted to do something to help.

An ultra-runner, Mark - who is a member of Omagh Methodist Church - discussed the idea with his partner, Lyndsey, and then put his plans into action. He was going to run a marathon - in his Coolnagard Meadows garden. In total, 840 loops.

"I was given a bag of food to provide to the Life Triumphant Church foodbank, which my church supports," explained Mark, who admits he hadn't any knowledge of the need for a foodbank in Omagh until recently.

"When I was speaking to Pastor Graham, I was fascinated to learn the number of people who are turning to the foodbank for help at the moment," added Mark.

"I came home and talked to my partner Lyndsey and we were thinking about what we could do to generate more food.

"I thought, 'I can't do anything outside of the house here, so l will run a marathon in the garden', and that's exactly what I did."

With the help of their children, Robbie, Kyla and Bradley - who wrote letters to neighbours detailing their father's plans - Mark began his fundraising appeal for food donations.

"I honestly couldn't believe the response. Within hours the number of food donations was incredible. There was money given too which Lyndsey used to buy more food from Asda."

The demand for the foodbank's services is "through the roof", Mark said, and he was happy just to be able to play his part to help the community.

"There are people availing of the foodbank who you never thought would have needed to. Some people unfortunately just don't have enough to feed their family - and that's the reality of it."

Mark hadn't ran a marathon in almost a year prior to this remarkable effort, which makes the achievement all the more inspiring.

"I had been running four miles here and there, but I knew that I was in my own garden if I wanted to take a rest during the marathon," he said.

Incredibly, the 26.2 mile challenge took him only four hours and 45 minutes!

"It's not a quick time," said modest Mark. "I had a bit of craic along the way, but if I'm honest I struggled for the last hour.

"I have done ultra-runs in the past - Belfast to Dublin - and I found that a lot easier than the marathon in the garden. Mentally, it's difficult, doing loops and loops. But it was for a good cause and that's what I kept focusing on."

Completing a marathon is always an emotional occasion - and with his children running the final two loops with him this was special.

It was a true team effort, as Lyndsey ensured he kept well hydrated with oranges and other small snacks.

"I was sore the next day! Particularly my knees as there are a lot of sharp turns in the garden."