LONDON HAS NOTHING ON SPAMOUNT! 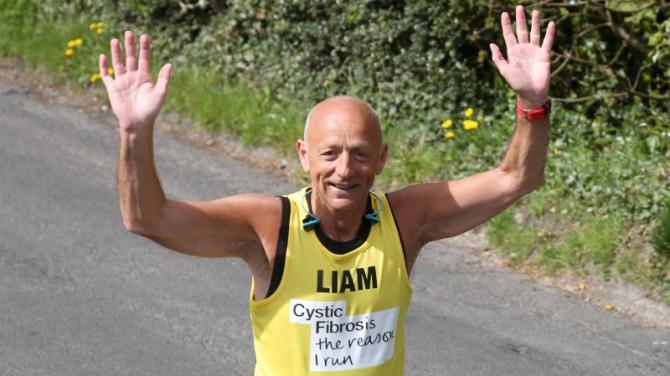 FOR one day only, the rural village of Spamount was transformed into the city of London - and for a very special occasion.

The London Marathon is one of the most amazing spectacles in the world, with millions of supporters cheering on the thousands of competitors who take on the 26.2 mile trek.

But last week Spamount proved to be every bit as special to local man Liam McHugh, who made history in the village - just a couple of miles from Castlederg - when, cheered on and motivated by his family, friends and neighbours, he completed the village's first-ever marathon, raising an eye-watering sum of money for Cystic Fibrosis research in the process.

Liam had been training and looking forward to the London Marathon, which was supposed to take place at the weekend. Disappointment followed when the event was postponed until October, but determined to hit the £250,000 mark in his years of fundraising, Liam decided to run the 26.2 trek much closer to home. Right outside his front door, in fact!

Speaking to the Tyrone Constitution after crossing the finishing line, Liam struggled to contain his emotions.

"What a day. I can't describe the feeling, emotions and great support I had all around the village of Spamount, from my friends and family, to everyone standing outside their houses supporting me. They clapped me the whole way around and most of them were there for the duration of the marathon. It was just amazing."

In a short speech at the completion of the 28 loops of the village, Liam said: "Who needs London when you have Spamount?" A question that was greeted by almighty cheers!

Liam's main motivation has always been his daughter, Rachel, who is one of over 100 Cystic Fibrosis sufferers in Northern Ireland and he is absolutely delighted to have now topped £266,000 after 28 years of fundraising since his daughter was born.

In what was a 'marathon' fundraising effort, supporters donated a huge £34,000 - and counting - for Liam's latest trek. And what makes it more remarkable is that Liam only opened his Just Giving page just over a week ago!

"Charities are struggling at the moment and they need every penny," he continued. "The CF Trust is giving out a lot of grants to families who are struggling financially. I wanted to do something in my home village - to run the first marathon in Spamount.

"There are still donations coming through as well. I am absolutely over the moon. I'll be running on adrenaline now, I'm just on a high. Words can't describe the way I feel."

Although his finishing time was never important to Liam, he was delighted to look down at his watch on completion of the race to see it read three hours, 33 minutes and one second.

"Last year in London my time was 3:34, so I was a minute quicker in Spamount! I would have been happy with four hours because I didn't think I would have the same buzz of two million spectators and 50,000 runners - but my local village came out and gave me the biggest boost. I just kept going and going. It almost felt like being in London! In fact, it was that bit more special, because I knew everyone who was out showing their support."

Liam, in his own words, struggled for the last "three or four miles" but the crowd spurred him on to the finishing line. And the support didn't stop there.

"I must have had 500 messages on my phone when I entered the house. I checked my Just Giving page and there must have been another 100 donations. On top of that my wife, Eleanor, had a Cystic Fibrosis fundraising bucket and people were coming along to put money into the bucket."

Donations online have been coming from near and far. Kevin Zahller, from Colorado in the United States, donated 300 dollars, with a lovely accompanying message which said: ‘The love for your daughter, I cannot describe how strong it is. Your daughter is so fortunate to have a father like you’.

"I have had donations from all over England, Scotland, Wales and even as far as Brazil and different parts of Europe, but especially the local people - from Spamount, Castlederg, Omagh and Strabane. I also received 200 Australian dollars from former Castlederg man, Andy Meehan."

Rest assured, the money is going to a great cause. "When Rachel was born 28 years ago we were told that her life expectancy was 16 years of age. She's 28 now and she's Dr Rachel McHugh in psychology and I am the proudest father on this planet."

And everyone is proud of you, too, Liam, especially the village of Spamount, which you have helped put on the map.